“I go out on the flight lines for different reasons, and the smell of jet fuel and those machines really raises my blood pressure. ... I love it.”

For much of his career as a naval aviator, Capt. John Pettitt (Ret.) had to rely largely on himself. He flew single-seat jets, like A-4s, A-7s and F-18s, making him not quite a lone wolf, but hyperaware of his own surroundings and responsibilities.

“Every community in the pilot world has kind of a different personality. Like multi-crewed airplanes, they just love having someone next to them that they can get a second opinion on,” Pettitt said during an interview at his office at Northrop Grumman (NYSE: NOC) in San Diego. “Single-seat guys are pretty independent, they do their own thing.

“No one’s going to pick up after you,” he added. “Your life is on the line, and if you don’t do it very well you’re not going to live very long.”

In some ways, it seems paradoxical that in his role as a corporate lead executive at defense contractor Northrop Grumman, Pettitt has to bring different branches of the company together. In other ways though, he’s still relying on himself to pull a lot of different levers at once.

Pettitt’s job is to help bring the many disparate components of Northrop Grumman, many acquired through buying smaller companies, and make sure they all know who to talk to within the larger structure of the corporation. He also has to do this for the greater business community, local military leaders and the region on the whole. His job requires building relationships.

Pettitt said his experience in the Navy is a major help there, particularly his post-flying assignment working for the Office of Program Appraisal under the Secretary of the Navy in the Pentagon. The job required learning about the budgeting and procurement process of Congress and the Department of Defense. 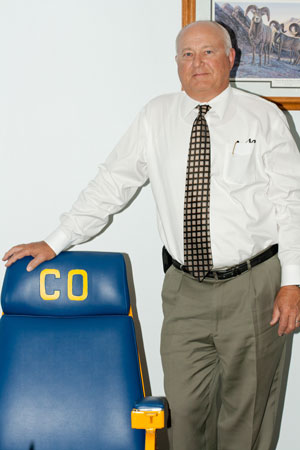 Capt. John Pettitt (Ret.) stands aside his restored "ready room" chair, one of the chairs pilots sit in as their upcoming mission is explained. Staff photo by Sarah Strong

That kind of knowledge is particularly important now as the country scales down its military operations in Iraq and Afghanistan and therefore its defense contracts as well.

“The world’s not falling to pieces,” Pettitt said, when asked about the likely downturn in funding. “We’ve got a huge backlog in this corporation, we’re lead-turning this, we’re not going to wait until it hits us in the face to make some course corrections. Our leaders and our managers are working this around the clock as we speak.”

In guiding the company through this transition, Pettitt said that managers need to lead, and leaders will have to manage. The difference between management and leadership, he said, is making sure everyone in an organization is rowing in the same direction and working toward the same goal.

In the military, he said, everyone keeps the end user — the war fighter — in mind, because ultimately they are all war fighters. If it’s not their job to be on the front line, it’s to offer some kind of support to the front line. In the business world though, employees have all kinds of different motives. Pettitt said he sees the most important job of Northrop Grumman’s leadership is to get everyone, civilians and former military alike, to concentrate on helping the military.

Managers generally have to focus on what they can do within certain budgets and schedules, but leaders must focus on carrying out the job.

Pettitt himself never flew in combat missions, though he did fly around the world, at bases and on aircraft carriers. He was never stationed in San Diego, only coming here after he retired.

He joined the military in the early 1970s, during the last years of the Vietnam War, and got his wings just as it was ending. Pettitt said he had considered the military while growing up in Idaho, but while he was a student at the University of Oregon, he was left with little choice.

“I had always thought about going into the military, but I was always going to go into the military on my terms. And then, while I was in college, we went to a (draft) lottery system,” he said. “I got a bad number my junior year, which meant as soon as I graduated I was going to get drafted.”

Pettitt didn’t want to be drafted into the Army, where he’d likely be sent right to the war. Navy aviation recruiters on campus convinced him to sign up with them.

For someone who originally only joined the Navy to avoid the Army, Pettitt’s military service became his life’s passion. His office is full of posters and models of planes, as well as medals and photographs from his time as an aviator. One of his unique decorations is a restored “ready room” chair, one of the chairs pilots sit in as their upcoming mission is explained.

He enjoys that his current job allows him to continue to help those in the military, but something of the individual pilot remains within him. Asked if he misses flying, he answered “yes” before a reporter could get the full question out. He said he tried flying nonmilitary planes, but it felt like driving a car compared to “going from 0 to 600 in the blink of an eye.”

“I go out on the flight lines for different reasons, and the smell of jet fuel and those machines really raises my blood pressure,” he said with a smile. “I love it.”