Relocating every two years while serving in the Navy taught the Board of Port Commissioners' 2012 chairman how to quickly adapt to new organizations.

“Organizations have personalities, like people. You adapt to where the organization is and try to meet the needs it has,” said retired Adm. Lou Smith, who replaces outgoing Chairman Scott Peters. “Coaching the Chargers in 2001 is very different from coaching the Chargers in 2013. There are different players, people, strengths and weaknesses. You get in the flow, realize where it was, the strengths and weaknesses, and what’s important for the future.”

Smith ran progressively larger organizations all over the world, from Honolulu to Brunswick, Maine. He ran an organization at the Pentagon with eight people and was a former commander of the Naval Facilities Engineering Command with 18,000 people.

“Running big organizations is different from running little organizations, but basic things carry over,” Smith said. “I consider myself a good coach from a lot of years sitting on the bench and observing. You need to observe what’s going on out there and deal with other people and through other people.”

Smith learned about leadership and management during his 32 years in the military. He served three tours in Vietnam supervising construction facilities for the Marines. He was sent to work with the Department of Defense and Congress in Washington, D.C., and after, he ran the Navy’s Public Works Office in Keflavik, Iceland. By 2000, when he retired from the Navy as a two-star admiral, Smith had been responsible for more than 360 naval bases around the world. 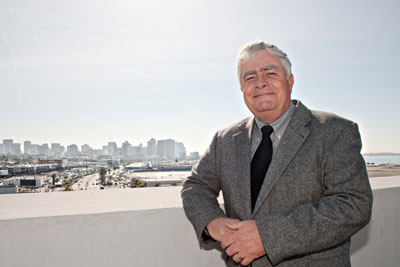 Leadership, as a subset of management, is “everything you do as a human being,” Smith said. Laying people off is never something a leader wants to do, but in management it has to be done, he said.

Smith, who is originally from Milwaukee, joined the Navy through ROTC at Marquette University, where he studied civil engineering.

“In the Navy, I did a lot of what I’m doing right now,” said Smith, including working with real estate, construction, maritime and environmental issues. As program director on Proposition MM and after working for five years at Sharp HealthCare, Smith said, “I’ve done all of this.”

Smith also has his master’s degree in environmental engineering.

“I’m sensitive to habitat and water quality. I tend to get geeky on things like copper and the bay,” Smith said. He said he likes to find the science of the problem, like when considering fireworks over the bay.

Smith considers himself a “systems guy.” He prefers to create a system to determine where a problem originated, instead of going straight to the outcome.

A new strategic plan for the Port was recently renewed for the next 10 to 15 years. This framework allows people to follow a plan and not get caught up in the daily “churn.”

“People get caught up and don’t manage where they’re going or what they’re doing. Don’t let the day-to-day churn run your life,” Smith said.

Smith has been serving as a commissioner since January 2010. He sees the Port of San Diego as the “exemplary port,” or an example of how all ports should be run.

“I think this is a place other ports should come to. Ports can ask how we do things,” Smith said. “It’s a model of functionality.”

The biggest longer-term project facing the Port is the Chula Vista bayfront development, which has been cooking for 40 years, Smith said. The project will create more than 200 acres of parks and open space, retail shops on the commercial harbor, redevelop underutilized and vacant areas, establish a continuous pedestrian walkway, and create ecological buffers, according to the Port of San Diego website.

The Port is also busy with Phase 1 of the North Embarcadero Visionary Plan, which began on Jan. 5 and is expected to be completed by June 2013. The project stretches along 1.2 miles of the city’s waterfront, from the Navy Pier to B Street Pier. The project will create new public open space with landscaping, a pedestrian promenade, shaded pavilions, restrooms and public art.

Ongoing projects at the Port include the Wings of Freedom, the Convention Center and redoing a capital improvement program, according to Smith.

Smith said he strongly believes in a representative democracy, and the Port “is here to do the right thing.”

There are seven members on the Board of Port Commissioners representing the cities of Chula Vista, Coronado, Imperial Beach, National City and San Diego. Smith was sworn in to represent Coronado in January 2010.