Wayne Goodermote: 'It always comes back to people'

“Leadership is people-oriented — you’re leading people. You’re in a guidance position. You’re the point person, and you want people to follow you.”

One year crammed in a 7-by-8.5-foot room with four people taught Wayne Goodermote about the one word that has guided him through his career: people.

“On the flipside, there are things you do that may irritate other people. I look mean. I have a great sense of humor and I laugh on the inside. I have a tendency to intimidate people. I learned to warn them up front to play along with me. You learn to adjust yourself to accommodate others that you’re around. It’s not always easy.”

Goodermote joined the ROTC at the University of Rochester, where he earned his bachelor’s degree in industrial management. He joined the Navy’s aviation program with hopes of becoming a pilot. But, because of his 20/30 vision, he was forced to take the backseat. His squadron deployed in May 1967 aboard the USS Constellation and was shot down in August by anti-aircraft artillery.

For 2,040 days, Goodermote was a prisoner of war and lived in solitary two times for one month.

He learned to be a leader through observation.

“I was around exemplary leaders — ‘Do what I do and follow me’ — they lead by example,” said Goodermote. “On occasion, I was around leaders who had trouble finding their way out of a wet paper bag.”

Goodermote said he learned to copy what his leaders did well, and steer away from things they did wrong. 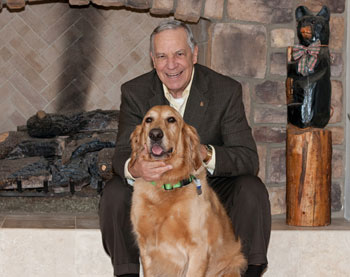 “Leadership is people-oriented — you’re leading people,” said Goodermote. “You’re in a guidance position. You’re the point person, and you want people to follow you.”

Goodermote used his interpersonal skills to help him through his tours in the Navy, during his careers in construction management and environmental engineering, and now as president of the San Diego Rotary Club 33. He has been a member of the rotary since 1992, after retiring from the Navy in 1991 as a captain, Civil Engineering Corps.

“Management is the accomplishment of tasks — managing people to accomplish something,” said Goodermote. “Point the way and get out of the way — don’t micromanage. But to find the way, you need to get down in the weeds and find the pieces to it.”

After learning of civil engineering while in captivity, Goodermote met with the chief of the Civil Engineering Corps and was accepted with a proviso that he pursue a degree in architecture. Goodermote earned his master’s degree from the University of Colorado, where he met his wife.

While serving a tour in Guam, Goodermote was a production officer at the U.S. Navy Public Works Center, “responsible for everything that broke.” He was in charge of 940 people, 11 of whom worked directly for him.

“I was constantly changing hats, from supplies to finance to utilities, but it all comes back to people,” said Goodermote. “You learn to use people’s interests and experiences to your advantage. If they’re in a job they hate, even if they have the education, they probably won’t do a good job for you. Try to find a fit between their interests and capabilities. A happy person will be more productive.” 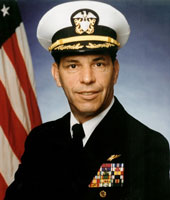 While in Hawaii, Goodermote was on the phone, calling the chief of the Civil Engineering Corps to announce his resignation because of a boss who always said, “Shut up and listen.” Instead, Goodermote hung up the phone, kicked his boss’s door open and said, “It’s time to listen to me.”

“A lot of people are too intimidated to do that. Maybe I do it too much because I’m a bright red, type A personality. You have to put a little bit at risk to make things better,” said Goodermote, who said he always encourages his subordinates to be open with him about suggestions, answers and changes.

As the commanding officer of Amphibious Construction Battalion One in Coronado, Goodermote looked after the morale and welfare of the people working for him.

“It was a position where instead of being mentored, I was the mentor,” said Goodermote. “I was getting them to grow from a supervisor/management standpoint. I certainly had people along the way who did that for me.”

Goodermote received 3-star approval to come to San Diego as the officer in charge of the Broadway Complex Redevelopment Project, where he faced a lot of opposition and had to learn to compromise. Thinking ahead was a “critical aspect” in that position, he said.

“You have to figure out what your parameters are. Figure out who you can trust and who you can’t trust — who’s on your side and who isn’t. Use those on your side to your advantage and for support,” said Goodermote. “Take a less combative position with those who are against you, but stay in front of them. If they’re going to go after you, you want to look down the road and say, ‘If they come after you, what are you going to do?’”

After retiring from the Navy in 1991, Goodermote worked in construction management at Vanir, where he was hired to set up a Southern California office.

He then worked for an environmental engineering firm based in Maryland. He was in charge of the Western part of the United States, marketing to the military.

“I worked out of the house. I hated that job — there were no people around,” said Goodermote.

He retired at 57 after his last job at a construction management firm, which he quit after two months because of a long commute.

Working in the military, in the Civil Engineering Corps, for the private sector and now in Rotary, Goodermote has learned to adjust the way he treats people.

“In the military, you can order people around. In the Civil Engineering Corps, you have more control. In the private sector, you have more control over people than in the military; you can fire people. I don’t recommend it, but you have more latitude with what you can do with people,” said Goodermote. “With volunteers, you ask, don’t tell anyone what to do. You’re building cohesion and support for what you think needs to be done. There’s no one management style, it depends on the situation. But it always comes back to people.”

My family has had Wayne's POW bracelet in our family since the 60's. I found this article while searching his name. I'd like to return the bracelet to him and his family.