Mary Lyons helps pave the way to the future

"To be a good leader, you have to make sure management is in place.”

As an active reservist, there was a time when Mary Lyons was the only woman among a group of midgrade officers being considered to command a unit.

“My name came up, and one fellow said, ‘I don’t know about her, she’s not real aggressive.’ Another officer spoke up on my behalf and said something like, ‘She may not lead like you do or like we do, but her leadership is effective,'” said Lyons, who has been the president at the University of San Diego since 2003.

He persuaded the other men to give Lyons a chance, and that’s when she got her first command.

“It shows the importance of mentors — people who will be supportive, speak up for and look for talent and open doors for folks who can’t do it themselves,” said Lyons, who said she tries to do the same for her colleagues. “I encounter high potential people, and I try to provide them with opportunities to grow and develop through schools and programs to build out their portfolios.”

Lyons entered a convent right out of high school, where she first saw a college classroom.

“I don’t know if I would have gone to college if it weren’t for that,” said Lyons, who was the first in her family to attend college. “They were strong women devoted to serving others — what better examples could I have had?”

While working on her undergraduate degree at Sonoma State University, a professor asked Lyons if she was going to pursue her graduate degree. Having little to no knowledge about financial aid, Lyons had never even considered it. The GI Bill was her big incentive to join the U.S. Naval Reserves, and as someone who wanted to become a teacher, it was a “great opportunity for me,” Lyons said. 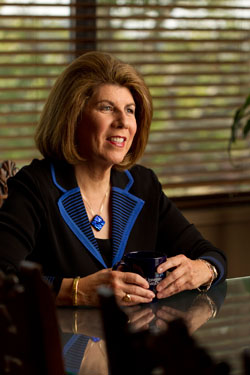 Lyons received her master's degree in English from San Jose State University and her doctorate in rhetoric from the University of California, Berkeley.

Moving so much as a child growing up in a military family — her mother was a member of the Navy’s WAVES during World War II — Lyons learned how to adapt quickly in different environments.

“I did move a lot, and my parents were extremely positive about every move we made. They always told us that each move would open up new opportunities and adventures for us,” said Lyons. “The quality of adaptability and not being afraid to get up and move was really critical in my own upbringing.”

Lyons said her family was always learning about the local communities, especially when she lived in Africa in the ‘50s. Her parents were open to learning about people and the culture in each area.

Lyons retired from the military in 1996 as a captain in the U.S. Naval Reserve. During her 25-year career as a U.S. Naval Reserve officer, Lyons had an active duty position teaching at the Naval Training Center in San Diego and two appointments as commanding officer of Naval Reserve units.

She had formal leadership and management training, schools and mentoring, but a lot of her knowledge has come from “on the job experience,” she said.

“There would be somebody in management who would make sure men and women are prepared for encounters, especially in combat, with training and equipment,” said Lyons. “A leader is the one who is going to inspire them to put themselves in harm’s way. To be a good leader, you have to make sure management is in place.”

Lyons said she looks for opportunities to help other people grow, develop and do their best.

“The best thing I can do is in some ways give people the sense that the horizon is limitless and help launch them to the horizon,” said Lyons. “In my work in academia, I’m privileged to be with talented and smart people. It’s my responsibility to listen very carefully and do my best to pave the way.”

It’s the leader’s responsibility to articulate that vision and keep it in the forefront, said Lyons, and to keep the focus on the horizon and not the minutia.

“Teaching at the Franciscan in Berkeley was an extraordinarily important experience. Men and women who were extremely smart and made a commitment to study and work and give their lives to people who did not have a voice or a lot of material wealth. It was a very important part of my life,” said Lyons.