James Cleary: 'Leadership is about the group'

“Leadership is not necessarily taking the helm and trying to establish rank and role. It’s more about letting people exhibit their talents and skills.”

After getting lost during a hot day, James Cleary showed up to his interview with the Air Force Academy with his tie loosened and thought, “There’s no way they’ll pick me.”

“Maybe it was because I was relaxed. I wasn’t uptight or worried about giving perfect answers,” Cleary said.

His relaxed approach earned him a less than outstanding military grade during his junior year in the Air Force Academy.

Between junior and senior year, Cleary said cadets were sent to an Air Force base for three to four weeks to interact with the officers and civilians stationed there. As part of what he referred to as “punishment” for his poor military grades, Cleary was sent to a base way out in Missouri, where he said he learned the most about leadership.

“One day, we were sent around with a guy who was in the Air Force for 20 years as a tech sergeant,” said Cleary, who, when he graduated from the academy, would have a higher rank than this man. “His job was to maintain missile silos in the field. I was fascinated by his experience and his dedication to his job, his family and to the country.”

But Cleary said the tech sergeant was initially very tentative and not very friendly toward himself and the other cadets.

“He told us the last group had no interest in him. … The more we asked questions, the more he got into it,” Cleary said. “Leadership is not necessarily taking the helm and trying to establish rank and role. It’s more about letting people exhibit their talents and skills.” 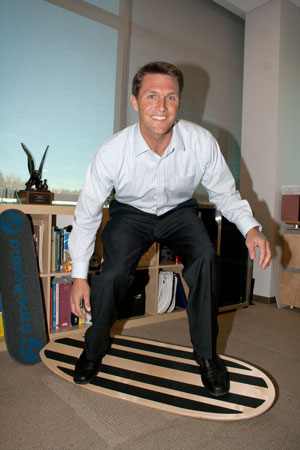 As a partner and intellectual property attorney at Mintz Levin, Cleary said he leads with a flat hierarchical structure.

“My assistant will rain blows on my head for not doing what I’m supposed to do,” Cleary said. “It’s amazing how so many people take rank seriously. Trying to lead through rank is not going to be effective.”

Cleary said that leadership is about the group, and he learned in the Air Force to work as a member of a team. One of his colleagues at Mintz Levin is a Naval Academy graduate, and Cleary said they know they've got each other’s backs.

“If something isn’t getting done and I’m screaming, that person isn’t going to work with me again. Reigning by terror isn’t effective in the long run,” Cleary said.

He said he learned his leadership skills by paying attention to people he came into contact with both at the academy and in the Air Force.

“If you tout rank too much and focus on hierarchical structure, the people who work for you could easily screw your career. The enlisted will subvert you if that happens,” Cleary said.

Cleary learned these skills through watching his father, who was in the Navy for 23 years, and how he interacted during softball games.

Cleary graduated from the Air Force Academy in 1989 with a bachelor's degree in electrical engineering and a specialty in communications. In his senior year, he decided he wanted to be a patent attorney.

“Working with inventors sounds interesting, and in fact it really is,” Cleary said.

Cleary is currently working with Kelly Slater, a professional surfer, on a patent for a wave pool mechanism for generating a 6- to 10-foot solitary wave.

With his clients, Cleary finds himself in more of a management position than a leadership one.

“Management is more of the details of the process, with much less focus on the people,” Cleary said. With his clients, he focuses more on returning calls, corresponding with the client and getting documents in order.

Cleary earned his master’s degree from Chapman University and his juris doctor from the University of California, Davis. He was the senior test engineer and project team leader for the U.S. Air Force Defense Dissemination Program from 1991 to 1994 and the program manager and technical representative for Northrop Corp. at the U.S. Air Force Office from 1989 to 1991.