John Turpit leads from the front

"There's always going to be a hill trail out there. When you’re leading Marines, you have to lead from the front – and when you’re running up the hill with a platoon or company you must make it to the top."

While in officer candidates school, John Turpit learned that leaders must lead from the front, and they must make it to the top.

Turpit, now director of corporate and developer services at RJC Architects, remembered starting one morning marching toward what he called the “Hill Trail.” The group was on its way to an overnight camping trip. At about a 40 percent grade, the hill was steep, and Turpit remembers it always being wet and muddy.

“During forced marches you would slip and slide and claw your way to the top of this hill trail,” Turpit said. That morning, the hill trail was “as miserable as always.” After reaching the top, the group made it through the woods to its camping site.

The next morning was cold, rainy and miserable, said Turpit, and the group was promised hot showers and breakfast once they returned to Marine Corps Base Quantico. They got within sight of the base when they were ordered to march back up the hill trail.

“We thought, 'OK, what’s up? Did we make a mistake?' Nobody said anything as to why we were doing this,” Turpit said. “We were tired, cold, hungry and looking at the hill trail again. You were picking guys up next to you, then you would fall down. … Some fell down and stayed down. We tried to drag them, but they weren’t moving.”

The ones who made it to the top were free to go back down to breakfast. To this day, Turpit doesn’t know what happened to the rest. 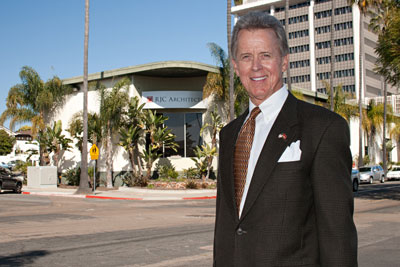 “There’s always going to be a hill trail out there. When you’re leading Marines, you have to lead from the front — and when you’re running up the hill with a platoon or company you must make it to the top,” Turpit said. “And after, there was a reward — we got hot showers and chow. In a tough spot, you push through, and there’s a reward out there.”

Turpit was assigned to the Marine Squadron at Avery Point, N.C., where he flew RF-4s. There were no guns or bombs, but there were cameras in the nose of the airplanes.

“It was a great experience — the most fun you could have,” Turpit said.

While in the Marines, Turpit learned that peer evaluations can be “very revealing.”

“When you’re the owner, principal, boss — everyone is nice to you. But sometimes the staff isn’t nice to each other. They’re not helpful and not team players,” Turpit said. “Deficiencies and compliments come out in peer evaluations.”

Turpit left the Marines after six years and started working as a commercial pilot.

“It’s not as fun flying people from point A to point B,” said Turpit, who soon found himself looking for another career path. With a degree in economics from the University of South Sewanee, Tenn., Turpit expected to find a job in banking and finance. He took a personality test at the advice of a family friend, a mortgage banker named Bob Sutro.

When he told the personality test administrators that he wanted to be in international business and finance, they asked him if he took the test backward. The test showed he had a design aptitude — “a sensitivity to proportion and balance,” Turpit said. “I’m not a numbers guy.”

In his own architecture firm, Turpit Architects — which was bought by RJC Architects in 2003 — he would administer personality tests to all prospective hires.

“As I hired people who had taken the test, what the profile said — it was who they were,” Turpit said.

Turpit began his career in architecture working with family friends in Mexico City, where he met Harry Ransom, an adviser from Rice University in Houston.

“He was patient — he had to be to be an adviser to a foreign language university,” Turpit said. “I think patience is part of leadership. It doesn’t happen overnight.”

Turpit said a leader can be part of a team.

“The person who is leading may not have the title, but they lead because they lead by example. They’re humble when it counts; they’re convincing when it counts. They have a focus and a goal,” he said. Whereas management comes with a title, he added.

“Management is bringing the project internal and managing the staff you have to get the project out the door,” Turpit said. “In leadership, if you can argue that a design is cost-effective and not off-the-wall, you can lead the client in that direction.”

Turpit later went to the University of Texas in Austin for his degree in architecture.

When designing a Marine memorial at Camp Pendleton, Turpit explained to Maj. Brian Van Herbulus the relationship between his design and the 1st Marine Special Operations Battalion insignia.

“I was relating it to something that is part of his world and bringing those things into the scope of the monument,” Turpit said. “It’s leading somebody through the process that you’ve just been through to get to the result.”

The monument, which came from the NAIOP’s Community Involvement Committee, was dedicated in September 2011. It is designed to look like the 1st Marine Special Operations Battalion’s insignia, which includes the Southern Cross and a dagger, representing that Marines get in there first and come at all angles, Turpit explained.