Harry Guess kept walking after the Navy rejected him for having flat feet.

A few years later, when it was an all volunteer service, a Navy recruiter stopped him from joining the Air Force.

“Surprisingly, my feet that were still flat were OK,” Guess said. “I still don’t have a problem, and they’re still flat.”

Guess, a native of Nashville, Tenn., graduated from Vanderbilt University and joined the Navy to see the world, he said. He spent 24 years in the Navy before retiring and worked mostly as a supply corps officer, “the business managers of the Navy,” he said.

He kept his business manager role outside the military and currently works as chief financial officer at the Veterans Village of San Diego.

“Teamwork is how things get done,” Guess said. “When you work with people, you have to be flexible, but you have to be clear. The more precise you are in directions — both receiving and transmitting — the easier things are then to work.”

Guess learned this lesson while on his first tour on submarines. 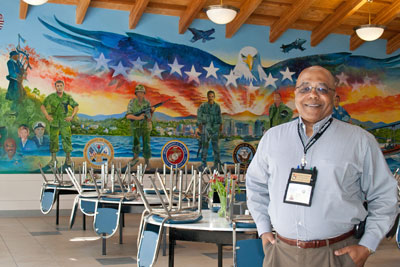 “We all depend on each other to survive on a submarine,” Guess said. “There’s a precise way to do things. If you vary, it can cause trouble.”

Guess uses these skills to work with the finance department at Veterans Village.

“It’s a typical finance department with a division of roles — accounts payable, ledger accounting and billing. All the pieces fit together. When you are managing 50 different fund sources, and there’s one financial report, you make schedules and deadlines. It works,” Guess said.

After retiring from the Navy as a captain, Guess worked for a nonprofit organization for three years. A woman he worked with at the nonprofit recommended him for a position at Veterans Village four years ago, and he has been working there since then.

At Veterans Village, Guess said he has to be both a leader and a manager.

“I believe firmly in sharing information and talking with people and answering questions to the best of my ability,” Guess said. “A lot of managers don’t take that approach. In this military, it’s ‘do as I say.’ People respond better if you sit them down and talk and understand why we’re doing something. Talking and explaining things is a key to good leadership.”

Guess said being on a submarine was like living in a building for two months. It was compartmented with living, working and communal spaces separated.

He said he worked for one officer two separate times who left a lasting impact.

“He was a man who was the hardest working man I’ve ever seen, but he had a boundary for, ‘OK, stop.’ He would stop and go home for certain key important things,” Guess said. “I’ve been accused by my family of being a workaholic. There are things for which you stop and make time for — church, family, other people’s needs.”

Guess said that while management is an oversight of a process, leadership “requires looking beyond the process and applying vision.”

“Leadership requires creative thinking. You have to look forward and put yourself in other people’s shoes. You have to have the lesson they would have and accept it might be a positive change or it might be difficult for them,” Guess said.

Recently, Veterans Village switched to an electronic time keeping system. For some, Guess said it was an improvement and an added convenience. For others, who may have never had to use a time clock, the change is something to get used to.

“You have to be sensitive that this isn’t an easy thing to accept. You have to have patience,” Guess said. “Tools that leaders apply wherever they are are patience and time.”