VP of GET Engineering relies on leadership skills learned in Navy

By SAMANTHA HENRY, The Daily Transcript
Wednesday, May 16, 2012

Capt. Dave Grundies joined the Navy to avoid the draft, and he successfully avoided it for 26 years thereafter.

“I had a low draft number — 30,” said Grundies, who was attending Wake Forest University in North Carolina at the time. “I wasn’t even that crazy about camping out as a Boy Scout.”

Grundies decided to join the Navy after one of his fraternity brothers chose to go into aviation. As a sophomore in college, he received a letter from the Navy stating it changed to an all-volunteer service, and he did not have to go back.

As he watched all of his business major friends interview with different companies and get turned down, he decided to go back to the Navy, where he was guaranteed income for at least three years.

“It kept being fun,” Grundies said.

He started as a navigator — “because it’s a shorter commitment,” he said — and completed tours flying airplanes and drones. He was also the commanding officer of a squadron.

He received his master’s degree in finance from George Washington University and, with his financial management subspecialty, he was able to become a comptroller for the Navy. He counted money at air stations and made sure budgets weren’t overdrawn.

He said the toughest thing he had to do in the Navy was to land on carriers during his second command.

He was the commanding officer of Fleet Logistics Squadron 30 and was the chief of staff for Space and Naval Warfare Systems Command headquarters, directing its move from Virginia to San Diego. 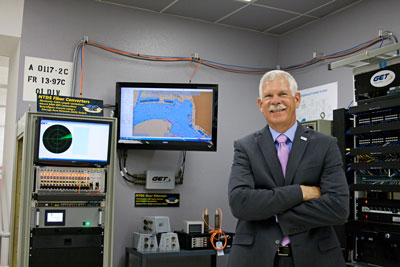 Dave Grundies, a retired captain in the U.S. Navy, now is the vice president at GET Engineering. Staff photo: Sarah Strong

Grundies kept all of his name tags from 1973 through 2000 and has them displayed in a shadow box on the wall of his new office at GET Engineering, where he is the vice president.

“It’s like being in a squadron,” Grundies said. “It’s a small group here — less than 25 people — and we all have the same mission.”

GET Engineering is based in El Cajon and is a woman-owned small business that engineers, designs, builds and ships products for government and industrial clients.

Grundies said his job “embraced my military culture” and he "returned to what I started with a long, long time ago” while working at GET Engineering, which provides naval tactical 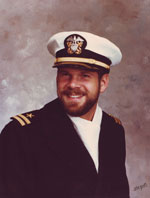 data related products and research and development services to customers in the Department of Defense and in the commercial contractor community. 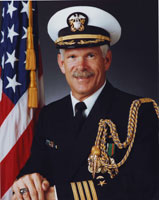 He said he uses a lot of the same leadership skills at GET Engineering that he used while in the Navy.

“You learn that if people know what’s expected of them, and everybody is treated the same, it works and it works well,” Grundies said. As a naval officer, he made sure the men knew what the penalties would be for not doing what they were supposed to.

“At GET Engineering, it’s amazing how people see it — with parking spaces, time off — people want to be treated fairly,” Grundies said.

He said he used leadership skills he learned at low deck plates to use as a commanding officer — basic skills that make “great parenting skills.”

“Leadership — I don’t know if people are born with it or learn it, or if it’s a little bit of both,” Grundies said. “Leaders get someone to go to a place and follow where they don’t want to go — that’s leadership.”

Leaders can get someone to do something and to want to do it, he said.

“You can do what you’re told, but not quite put your heart into it. A leader will get you to do it, will want to do it and will think of a better way to do it,” Grundies said.

Entering boot camp as a college grad, Grundies and his colleagues were called “poopies” and had to wear a “goofy helmet” to block their heads from the hot Florida sun.

“The drill instructors instilled in me fairness and that they’ll treat me badly if I didn’t do what I was supposed to do,” Grundies said. As a “cocky college kid” he said, “they throw a splash of water at you and fix that right away.”

His instructors made him start at the beginning to make sure correct actions would be taken to avoid any unnecessary losses.

“They’re not brainwashing you, but bringing you down to a low level to start at the beginning … so you know to put the landing gear down before landing. They break you down to zero and build you back to what works,” Grundies said. “This is not a democracy. This is not a discussion matter. … People have died for doing things the wrong way.”

In the Navy, Grundies also learned writing skills and to be specific when asking for requirements for a mission or acquisition.

“You have to say exactly what you want,” Grundies said.

He also learned public speaking and communication skills. He learned his skills “a little bit at a time” and often didn’t realize he was gaining the skills and knowledge until he was put to the test to use it.

He said he thinks anyone can manage.

“Management is a process that’s written. It’s refined through people who have studied it, and there’s a hierarchy of needs and regulations,” Grundies said.

Grundies was named the vice president at GET Engineering in January, after working as the director of naval programs at CACI International, the director of strategic planning for CSC’s Navy and Marine Corps Technology Center, and as the manager of business development at Harris Corp. He retired in 2000 as a captain in the Navy.

He has been a member of the Armed Forces Communications and Electronics Association since 1998 and currently serves as regional vice president for Southern California. He is the president of Navy League, San Diego Council; a San Diego Holiday Bowl lifetime member; a founding board member of Fleet Week San Diego; and a charter member of the San Diego Military Affairs Committee, according to the GET Engineering website.

Proud to be a Navy wannabe and even prouder of Capt. Dave's excellent explanation of leadership.