By SAMANTHA HENRY, The Daily Transcript
Wednesday, May 30, 2012

When Scott Biel resigned from the Navy in 1989, he knew he was going to miss the structure that he became accustomed to in his almost six years of service.

“I found that having a disciplined surrounding, where you are expected to manage your time and meet expectations, is a day-to-day challenge,” said Biel, who now works at Mintz, Levin, Cohn, Ferris, Glovsky and Popeo, where he practices in the real estate section.

Biel didn’t want to follow in his family’s footsteps and go to the University of California at Los Angeles, so he joined the Navy instead.

“My dad went to UCLA, my mom went to UCLA, my grandfather taught at UCLA… It was too much of the expected path,” said Biel. “I had a friend who went to West Point and I watched old John Wayne movies and said, ‘that’s something different.’ It was on the East Coast and it was free and I was guaranteed a job.”

Biel spent more than one year in the shipyard but would spend a lot of time away while at sea. His first submarine experience was at the shipyard building the USS Louisville.

“It was a big tube with wire and pipes sticking out of it,” said Biel. “Working for one-and-a-half years, we sealed the tube up around us.”

He worked on the Louisville as a nuclear-trained submarine officer. He would spend six to eight weeks on the submarines, where he said his brain adapted to living in a small area.

Biel’s wife didn’t approve of him being away on submarines for weeks on end, so he decided to retire from the Navy as a lieutenant after almost six years.

He pursued a law degree at the University of Pennsylvania, expecting to use his nuclear engineering background from the Navy to be a patent attorney. He started working in real estate and said he enjoyed doing negotiations over scientific and engineering work. 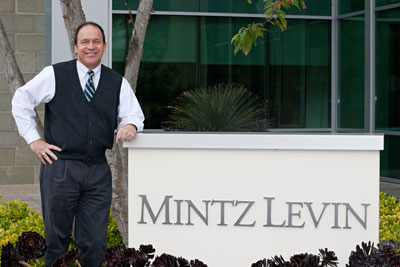 Scott Biel is an attorney at Mintz, Levin, Cohn, Ferris, Glovsky and Popeo, where he practices in the real estate section. Staff photo: Sarah Strong

“Then I got into leasing, which has a lot of procedures and attention to detail that resonates with my engineering side,” said Biel.

He worked in campus development with long-term financing and leasing. “It was a lot like in the military with managing projects and looking at not just long-term costs but also the flexibility and considering possible exit strategies and what-ifs.”

He said he likes practicing law because of the advance planning and reliance on people with special skills, much like he did while in the Navy.

Biel uses management and leadership skills he learned in the Navy to run a successful office at Mintz Levin. But, he said he sometimes catches himself being a good manager without being a good leader.

“Good management can lead to successful results on a project-by-project basis. Good leadership puts into place a way of ensuring good results on more than just the individual process,” said Biel. “Many times I tell myself I’m not being a good leader, I’m being a good manager. I get wrapped up in a project and forget about the big picture.”

Biel’s first skipper on a submarine showed him how to be a good leader by having confidence in those managers who worked for him.

“When they brought a problem to him, there was a sense that he had complete confidence in that person to do what was right. And also, who to keep a close watch on without making them feel like he didn’t have confidence,” said Biel. “It’s a special gift to keep the people working for you thinking they have your confidence, even when they don’t have your confidence at all. I think I have to be very confident in my own skills to not show panic or doubt.”

Self-confidence is the key to good leadership, said Biel, and not overconfidence.

“You need to constantly be developing yourself and need to have a reason to have self-confidence… it can’t just be delusional self-confidence,” said Biel.

He said he had both good and bad mentors while in the Navy.

While in the Navy and working with enlisted people, Biel said there was an “egalitarian and collegial atmosphere,” and he has tried to maintain that mentality in the practice of law by showing respect to both younger and older attorneys.

Being in the military gave Biel a different perspective than those who had the college experience — a perspective that Biel said he has had to overcome.

“A lot of people who went to school lived in a social environment where networking skills were more natural,” said Biel. “At the Naval Academy, it was more institutional relationships. Networking with peers and communication is a necessary part of doing a good job.”

He said there are two types of people: consensus builders and power mongers.

“Power mongers do what’s best and don’t have to keep others up to speed … People in the military are more on the power side,” said Biel. “Communication is just as important as getting the job done.”