Some people just come in, do their time and that’s all they do ... Others, they want to learn as much as they can about everything ... and take that extra responsibility.

An officer in the military is assumed to be a leader just by virtue of his or her rank, but that doesn’t make that person a leader, said Daniel Cuellar, manager of surgical services at Sharp Chula Vista Medical Center and former lieutenant commander in the Navy.

“You do that by making good decisions, by being responsible for your decisions, by being willing to make a decision, by leading and guiding by example, teaching and passing on information, by being loyal to your team, and putting them first and yourself second,” said Cuellar. “There are those who just by virtue — or I don’t know what — get promoted up, but people know who the real leaders are and who just holds the title.”

Cuellar learned to be a leader by both good and bad examples. He started in the Navy as a “bottom-feeder,” and enlisted right out of high school when he was 18 years old. He joined the Medical Enlisted Commission Program (MECP) and got his commission and his bachelor’s degree in 1993.

The good leaders taught Cuellar about himself — his strengths and his weaknesses. When he was about 20 years old, one of his lieutenant commanders started treating him differently.

“She was just giving me all of these really crappy jobs — all these shifts that were just really bad. She was always criticizing what I did, it was never good enough. There was always something I could have done differently, something that could have been done better,” said Cuellar. “So finally after weeks and weeks and months, I finally went to her office and said, ‘Why are you doing this?’ She said, ‘I was wondering how long it was going to take you to realize that you were being treated differently from everyone else.’”

His lieutenant commander taught him to identify people who have leadership potential and watching how they perform, what they do and if they naturally assume leadership. She told Cuellar that she saw that in him, even before he saw it in himself. 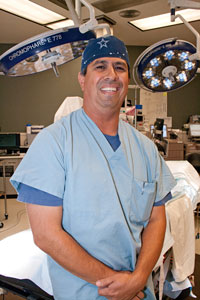 Daniel Cuellar is the manager of surgical services at Sharp Chula Vista Medical Center and a former lieutenant commander in the Navy. Staff photo: Sarah Strong

“So, when I was enlisted and I started making more rank, I started noticing how different people work. Some people just come in, do their time and that’s all they do. Others come in, work hard, and don’t want any other responsibilities. They’re hard workers, but they don’t want to do more. Others, they want to learn as much as they can about everything, know everything, and take that extra responsibility. They’re accountable, they’re mature, they’re different.”

When Cuellar became an officer, he made a point to pass on information and identify enlisted people who he thought would make a good officer.

“That’s what the military did for me — it made me see the importance of identifying future leaders and investing in them. Investing your time, energy, your knowledge, your expertise,” said Cuellar.

He takes a different approach from his lieutenant commander because “she really irked me,” he said.

“I throw things at people and kind of see what they do with it,” said Cuellar. “And see how they dissect it apart, how they prioritize: Do I need to do this today? Can I wait to do it later? What do I need help on?”

Cuellar said bad leaders are those who aren't accountable for their actions, lie, show favoritism, don't support their people and take credit for something they didn’t do.

When he was enlisted, Cuellar was stationed in Japan on a Marine Corps base. He had been working on a project for six months, reorganizing and restructuring the clinic to help solve patient flow issues.

“I had it packaged nice and neat and I sent it through my bosses to get their approval on it. My chief took it, she looked at and she made a very small change,” Cuellar said, noting that she flipped two rooms he had designed. “She said it was a revision, put her name on it and submitted it as her work.”

Cuellar used this experience to realize that when a leader is successful, people will recognize that in different ways.

Cuellar joined the Navy to do something different. He grew up in Albuquerque where going into the workforce instead of college was the norm, he said. He earned his master’s degree in 2005 when he was getting ready to retire from the Navy. He had been in service for about 24 years and after enjoying the people, structure and traveling of the military life, Cuellar started to feel more like he was working at a job. He retired in 2008 as a lieutenant commander and, after one day off, he started working at Sharp Chula Vista Medical Center.

“It’s a very different environment — the civilian environment compared to the military,” said Cuellar. “I had a lot to learn because the relationships between physicians and the staff and amongst each other are a lot different — the accountability is different.”

Cuellar said he works with nurses who are in their 70s and techs who are in their 20s. In the military, he didn’t work with anyone over 45 years old. He said he has to work to blend the different personalities and emotions to run an efficient operating room and department. In the military, Cuellar said he tried not to let issues leave his department and tried to handle them on his own.

“Here, it’s the very opposite,” said Cuellar. “It’s getting other people involved to come in and to help — and I still have trouble to this day doing that because I’m used to managing things or taking care of things myself.”

When Cuellar first started at Sharp, he said he was “winging it,” and just learning by asking a lot of questions.

After 18 months, the manager position opened up and Cuellar took it on an interim basis for four months before accepting the permanent position. As with his lieutenant commander in the military, the former manager noticed his skills before he did and trusted him to take the position before he felt he could.

While Cuellar’s title is manager, he uses his leadership skills to lead his people.

In the military, Cuellar said there was a saying about being the tip of a spear.

“Someone’s got to be the point man. Someone has to be out front seeing what’s coming, being ready to take that first hit, so everyone else behind you can be prepared to support you or fight,” said Cuellar. “So, when someone asks who wants to be out in front, when you do that honestly, consistently, people will be more willing to follow you.”

June 14, 2012 -- Sharp Healthcare unveiled its first  stand-alone cancer center. It is a 45,000-square-foot facility  with the TrueBeam technology radiotherapy machine, which is optimized to destroy cancer and preserve organs. Reporter Carlos Rico was at the dedication ceremony and has the details.