“To make a great team, you have to have just that – other people who are doing their job at the highest level.”

Christopher Kane’s confidence earned him more and more responsibility as a young military man, and his leadership skills warranted him higher ranks and titles as a doctor.

“In a sense, you feel unprepared when you have a responsibility that you’re unfamiliar with. On the other hand, I’ve never lacked for confidence… I always felt that with the support of the people around me, I could do it. That I was well enough trained and had the ability to do it,” said Kane. “You never do jobs, whether it’s being battalion surgeon or division chief, you never take on those leadership jobs alone. You really are depending very much on the team around you”

Kane is a professor of surgery and chief of urology at the University of California, San Diego Medical Center.

In 1990, Kane started his general medical officer tour in the Navy as a battalion surgeon of a Marine Corps battalion in Okinawa, Japan. One month after arriving, Saddam Hussein attacked Kuwait, and Kane moved with his unit to the Persian Gulf. At 25 years old, Kane was in charge of 850 men and was a medical adviser to the lieutenant colonel in charge of everything from food, water and sanitary conditions, to the care and transportation of injured soldiers and Marines.

“That was an amazing coincidence that during that one-year general medical officer tour we happened to have a war. And when you’re in the military, that’s bad luck or good luck, depending on your viewpoint,” Kane said. “But it’s a great opportunity to learn what the military does in that setting. And I think that much of my early leadership experience had to do with observing great professional soldiers in stressful situations.”

He said the key element of being a good leader is creating an environment where other people can excel. 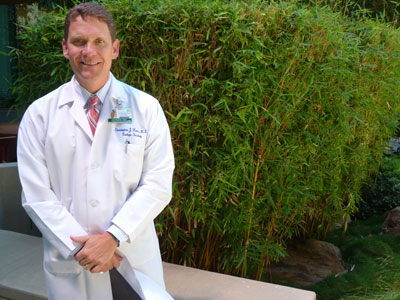 Christopher Kane is a professor of surgery and chief of urology at the University of California, San Diego Medical Center. Staff photo: Samantha Henry

“To make a great team, you have to have just that — other people who are doing their job at the highest level,” Kane said. “To me, creating a great team isn’t about being an alpha leader. It’s about the responsibility of creating an environment to let other people excel.”

Opportunity was never lacking for Kane. Much of the reason for this was the willingness of his supervisors to grant him more responsibilities. He was “deep selected” for both commander and captain. After finishing his general medical officer tour, Kane went to his residency at Oakland Naval Hospital and spent a year at the University of California, San Francisco. He then came down to the Naval Medical Center at San Diego.

“I finished my residency in 1995 and, as a young lieutenant commander, I immediately got a lot of responsibility at the naval hospital,” Kane said. “When you’re in the military as a very young person, you have opportunity for leadership.”

Kane said the most impressive quality of Marine leaders is how they treat the young Marines.

“They’re thinking about the mission first, but then the next thing on their minds is the welfare of the young Marines under their command,” Kane said. “There are many traditions in the military that I think many people don’t realize. When you’re out in the field and there’s food — chow — the youngest Marines eat first. So the colonels and the leaders eat last … And if we run out of food, and we haven’t planned well, we go hungry — not the Marines.”

“I was a busy surgeon and responsible for a lot pretty early on. I got promoted early and got a lot of additional responsibility,” Kane said.

The military trained Kane on how to give evaluations and how to run budgets through its junior officer leadership training. He said the “leadership continuum” in the military has been “very useful” in his academic career.

He left active duty after six years at the Naval Medical Center. He then became a faculty member at the University of California, San Francisco and chief of urology at the VA Hospital. He helped run the residency program and started a new fellowship program.

“I was in a place where I had the opportunity and where the people who were senior to me trusted me with a lot of responsibility pretty early,” Kane said.

Kane came to San Diego in 2007, when he said the urology program was in a growth and development phase. He leads the urology program as well as helps to run the residency program. He said his increasing responsibilities throughout his career have been a combination of opportunity and having leaders who allowed him to grow into positions where he could demonstrate proficiency with a small range to make mistakes.

“I think it’s quite a false thing to think that we must be fully prepared for that next position -- that we must know all about it before we tackle it. Because that’s never the way new positions are. We have to grow into them. We rely very heavily on the people around us to help in that process,” Kane said.

Kane was an early adopter when robotic technology first came out in 2001. He worked on the early cases at UCSF in 2002 and when he first arrived in San Diego, he helped turn it into a more efficient, high-volume and better outcome program, he said.

When identifying future leaders, Kane said the best predictor for future performance is past performance, and recognizing the willingness and eagerness of the trainees to take on more responsibility.

In addition to his military and hospital leaders, Kane’s parents also played a strong role in teaching him how to behave and communicate with people.