Patricia Reily: Everyone is a leader to someone

Supervisor experience comes quickly to those in the military, and everyone is a leader to someone.

“Everybody in the military is a leader of somebody. Because, if you’re in the Marine Corps and you’re taking that hill, you don’t know whether the person in front of you is going to fall. And then, all of a sudden, it’s going to be up to you to lead the people behind you,” said Patricia Reily, who retired from the Navy in 1995 as a commander.

And Reily was no different. She was the human resources director at Moffett Field and she was the first woman to run a 40-bed counseling assistance center for drug and alcohol abuse in the Philippines.

“There was a great, big sign on the fence that said, ‘No Women Allowed’ the first day I came to work and I thought, ‘Well, that’s going to have to change,’” Reily said.

Reily is the director of San Diego State University’s Troops to Engineers SERVICE program (success in engineering for recent veterans through internship and career experience). This pilot program sponsored by the National Science Foundation started 17 months ago and has placed 52 veterans in paid internships or salaried jobs with industries in San Diego, Reily said. Military people come from technical backgrounds and are more inclined to study engineering, she said.

There are 130 veterans in engineering at SDSU and more than 1,000 veterans on campus. Reily works to promote the students to local industries and will tell a CEO to take a special look at a student because “they stood the watch for you.” Having a job gives people dignity, and Reily said she wants to see this group of veterans have the opportunity to work. 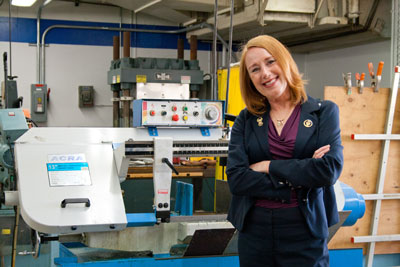 Leaders must have a vision, and that vision must be tangible, Reily said. Her vision is for the SDSU veterans to lead companies in this town.

“I think that is what differentiates leaders from managers — vision. You’ve got to have a vision of something, and that vision is your true north,” Reily explained. “And if you keep that in mind every day when you get up and go to work: This is where I’m going with these students, with these veterans, bringing out the best in them so they are future captains of industry, taking care of their people. I know they’ll do that because that’s one of the values they learn in the military.”

Reily retired from the Navy in 1995 to spend more time with her family. She went on to work with AmeriCorps, complete her doctoral degree at the University of San Francisco and work at a tutor-mentor program with the school.

Reily joined the Navy for a chance to travel, put in her four years and go to graduate school. She didn’t expect to find her husband and discover that leaving the Navy would be a difficult decision for her to make.

She completed her undergraduate studies at the University of Minnesota, where she studied journalism and political science. She paid her way through school by working for its daily newspaper and went on to write for a weekly community paper. Through reporting, Reily met many veterans, some of whom were photographers at the paper. They encouraged her to go into the Navy so she could see the world.

“Quite frankly, I was ready to get out of town,” Reily said. “So, I talked to a recruiter and joined the Navy and I went off to Officer Candidate School. And I thought, ‘What the hell have I done? This is crazy.’ I moved from this nice apartment and now I have this roommate and we’re getting up at 4 in the morning to pick up every piece of lint off of the rug and clean the floor with our toothbrushes.”

That training taught Reily attention to detail, patience and trust.

“There’s this thing about packing your own chute in the military. In the military, you’re in life-and-death situations, and so you always pack your own parachute. You pack your own parachute and you pack it right, otherwise it’s not going to open properly and you’re going to die,” Reily said. “So there is this attention to detail, because it could be on a flight deck of an aircraft carrier — if you’re careless and you drop something, like your phone, and it gets sucked into the intake of a jet, people will die. There’s this tremendous attention to detail.”

Attention to detail is taught mostly by the senior enlisted chiefs, who Reily wrote about in her book, “So There We Were … Leadership Stories From the Men and Women Who Make the Navy Work.”

The senior enlisted chiefs worked their way up from the lowest level in the military. Working through the structure from E1 all the way up to E9, the enlisted become more and more technically proficient and continue to train other people how to do their job, Reily said.

“They’re like the old yodas, even though they’re not that old,” Reily said. “In that very young organization where the average age is 19, these senior enlisted people, who are in their mid- to late-30s, they’re the old Yodas. They’ve experienced a great deal, so they can teach the young 18, 19-year-old sailor. They’ll tell you, ‘Well, let me tell you shipmate why we do it this way, because if you don’t, if you don’t secure that passage, if you don’t clamp down that lever, I’ve seen people lose fingers and hands.’”

With that experience, the senior enlisted chiefs train junior officers, and when Reily was 22 years old and fresh out of Officer Candidate School, she had a chief petty officer who helped her learn her job — because they’re the ones with the experience.

“I think leaders can be trained and I think there’s a certain amount of leadership training that everyone goes through in the military, but I think it’s mostly through watching people and through observing good leaders,” Reily said. “And learning from your mistakes and admitting your mistakes.”

“Courage, I believe, is the most important virtue because without it, you can’t practice any of the other virtues,” Reily said. “So it was about addressing sexual harassment and encouraging other women to do that — having the courage to say to a guy, ‘That was not funny. That hurt my feelings.’ Have the courage to say, ‘No.’”

“That stays with you after you’ve left the military,” Reily said. “I don’t know that that exists in a lot of civilian companies. I think sometimes it’s more about the bottom line — how much can we make. In the military, there’s this feeling, we take care of our people. The bureaucracy doesn’t necessarily, but in our unit, on our ship, we take care of our people. Someone’s got your back.”