Jay Doucet advanced through leadership roles as an exchange officer

Working as an exchange officer in the U.S. Navy allowed Dr. Jay Doucet to advance to leadership roles not afforded to him in the Royal Canadian Air Force.

“In the U.S., the ranks are generally higher for physicians, so there are more senior ranks. In the Canadian forces, for instance, there is only one general or flag officer, usually, who is a physician. Over time, in Canada the concept of physicians being in charge of medical units became less and less common,” said Doucet, who is an associate professor of surgery and director of the Surgical Intensive Care Unit at the University of California, San Diego Medical Center.

In the U.S. military, Doucet said, physicians can decide to have an administrative career and opt to go through training to follow that career path to become a general or staff officer.

“In the Canadian forces, that’s less common,” Doucet said. “Physicians are kind of employed to be physicians, and that’s it. ... As a result, I think recruitment and retention became more of an issue.”

The defined career trajectories in the military gave Doucet a sense of where he was in the organization and if he was following the career path he wanted.

“If you dedicate your career to the military as a specialist, you kind of feel like you should have some input into the process and how things are operated. And I think, over time, we lost that there,” said Doucet. “The U.S. Navy is quite a bit different. If you want to become an admiral and be the surgeon general of the U.S. Navy, there is a pretty well-defined track in how to do that. Or, if you want to be a clinical leader, there’s also certain ways to get that done. If you spend the time, the effort and take the additional training and learn about those systems, you can develop that kind of leadership ability.” 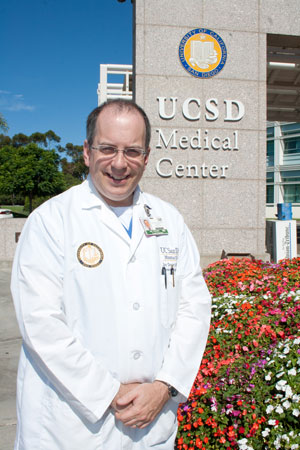 Jay Doucet is an associate professor of surgery and director of the Surgical Intensive Care Unit at the University of California, San Diego Medical Center. Staff photo: Sarah Strong

The U.S. Navy might be more capable to afford those opportunities to its officers because it is larger and has the resources to develop its people, said Doucet. The emphasis on developing leadership skills is not seen as much in civilian practice, he said, but it is starting to break through. UCSD has a health care leadership academy that Doucet is part of, where for 18 months students attend lectures and learn about the business side of medicine, how hospitals are run, how the health care system operates, and finance and leadership skills.

“In the military, that was kind of built in, because every officer is expected to have some leadership abilities,” said Doucet. “Whereas in the civilian world, it’s there but it’s not as integrated as it has been in the military.”

At UCSD, Doucet said he’s expected to grade his residents on leadership and executive skills and their decision making ability, but they aren’t trained in those areas.

“They’re supposed to learn by osmosis — by seeing surgeons and how they interact and how successful they are. We never teach them any of the actual skills that maybe we don’t believe is a teachable skill — maybe we believe it’s innate or something you just absorb,” said Doucet. “If you are a medical student or nurse or physician and you enter the military, that’s there – you’ll get exposed to it and it’s recognized that you have to understand those things to get ahead.”

The most important leadership skill Doucet learned was “paying attention to your people,” he said.

“If you want to get the mission done and get people home safely, you have to pay a lot of attention to them. That’s not something that’s ever taught in medical school. They don’t teach you anything about how interact with nurses or how to make sure the technicians are happy and have what they need,” said Doucet. “The problem with a lot of health care training is it’s about individuals… They don’t tell that when you have complex problems with patients and they need fairly advanced levels of care, that you’re going to need a team to get there.”

“We get some patients who are barely on the edge of survival and can literally be minutes or seconds from death, and you have to do everything right and there’s no way that you could do that by yourself,” said Doucet. “You can understand exactly where the patient is bleeding, know exactly what has to be done to stop that and get control, but if you can’t get the team to work together to get those things done, [it won’t work].”

A good team communicates well and anticipates the needs of other members of the team, said Doucet, which is a skill he said he saw every day in the military.

Another leadership skill Doucet saw in the military was going to the powers and showing them something to consider and convincing them it is the right thing to do. The suggestion to have a registry of wounded soldiers was initially denied, but surgeons took it upon themselves to develop the registry anyway and now there are databases of every wounded member in Iraq and Afghanistan. The surgeons collected data and proved that the information was valuable.

“In the long term, that’s the war that never ends. Eventually in Iraq and Afghanistan the coalitions are going to leave, but the effect on those soldiers will continue for the rest of their lives. In retrospect, that was really important,” said Doucet. “And that’s kind of what leadership is. You’ve got to recognize that some people are smarter than you at some things, and if you really are convinced that something is correct or right, and you can prove it, then you can make things change.”

Doucet learned that “anybody can be a leader.”

“You can exert leadership even from a very junior position and it’s just simply by knowing what the right thing is to do and being able to convince other people that you’re doing the right thing,” said Doucet. “Management is a little bit different. It’s more like tending a garden. There are a lot of things that need to be done, and there are good and poor managers. But you can be a good manager and not be a good leader.”

A good manager in peace time may be an ineffective leader in combat, he said, and an effective combat leader may not be a good leader during peace time.

Doucet joined the exchange program after working first as a flight surgeon and then a general surgeon. The different countries in NATO exchange officers for educational development and to learn how different systems work, said Doucet.

“For medical officers, it’s about learning how the different medical system works. You learn a lot about how things can be changed or integrated so countries can work better together,” said Doucet.

At any time, there are about 34 officers in San Diego serving in the U.S. Navy who are from Australia, Germany, Canada and the U.K., said Doucet.

As an exchange officer, Doucet went to the Naval Medical Center San Diego for two years as a general surgeon before he decided to specialize in trauma. Doucet snagged an open fellowship position at UCSD, where at least six general surgeons were trained to become trauma surgeons.