Corporate America may be cut-throat, but no arena tests the true make of a leader like the life-or-death reality of the battlefield. Col. Tom Magness has succeeded in both worlds, and now helps business executives become more effective leaders using his battle-tested techniques and personal insight from more than two decades of military service.

Magness, a retired Army Corps of Engineers leader and former commander of the Afghanistan Engineer District-North, shared this knowledge with San Diegans at a recent Society for Marketing Professional Services workshop.

Among the most fundamental lessons taught were that the quality that matters most when it comes to trusting a leader is competency, and that asking your team or employees to achieve at seemingly impossible levels encourages them to break existing barriers.

Magness used the example of his team building a prison in Afghanistan to illustrate this last point. They were working at a $1-billion-a-year rate, and were suddenly forced to increase that efficiency to a $4-billion-a-year level when it was made clear that the United States would be out of the country by 2014. Magness used the high-jump as an analogy for how he was able to increase his team's already saturated efficiency. 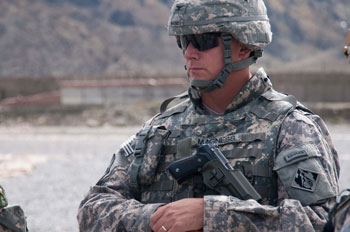 Col. Tom Magness is a retired Army Corps of Engineers leader and former commander of the Afghanistan Engineer District-North.

Magness also highlighted the importance of knowing your priorities and completing tasks according to their importance. Using a jar of rice and walnuts, he illustrated how people think their time is completely filled with unimportant and menial tasks and never have time to focus on the strategic aspects of their work.

When you fill the jar with rice and then try to squeeze the important walnuts on top, they don’t fit. If, however, you rearrange your priorities and put the walnuts in the jar first and then fill in the rice, or less important things, everything will fit.

What are these walnuts that leaders should be focusing on? In Army terms it would be the BFT, or Big Fat Tack. This is the core and location of the mission, and all communication and strategy is focused around it.

Magness said the same should be done in the business world. Leaders should have a set end goal around which everything in the company revolves. This will improve not only communication, but what Magness calls situational awareness, or knowing how everyone fits into the company in relation to the BFT.

“We want to have that kind of awareness in our organization because that’s how you respond quicker than the other guy,” Magness said. “That’s how you get a product to market faster than your competitor. This is how you make decisions in a way that allows you to turn quickly when the requirement is there to do that.”

Other specific solutions that Magness advised leaders implement included a 360 degree review where employees are evaluated not only by superiors but by subordinates as well, a written leadership philosophy that can be used to hold executives accountable, and focusing on leadership training and growing leaders within companies instead of always hiring from the outside.

While most military movies depict commanders and trainers using their voice box as a means of invoking fear and respect, Magness said that this isn’t necessary, or even beneficial.

“In 26 years I never once yelled at anybody — ever. Twenty-six years. I never cursed, I never yelled — ever. But I didn’t have to,” Magness said. “If you create a team that is inherently motivated, you select people and you demonstrate confidence in that way, you don’t have to yell. That’s not what leaders do.”

What leaders are expected to do, however, is lead from the front lines instead of from behind the safety of a desk, and share the risk with their employees.

“High performance, in extremis units have this element of shared risk,” Magness said. “You don’t have leaders that sit in the bunker and the office and send their troopers out and say ‘You guys go do dangerous things then come back and tell me how it goes.’ They’re out there with them. Whether it’s putting out a fire or going into battle, in these extreme units the leader is right there sharing that risk. Wear the same uniform, face the same enemy, have the same weapons. Everything is shared.”

Magness said that attitude would bode well in a business setting too, and would create more confidence in the leader and a stronger desire to not let the team or company down in employees.

Magness is also the author of the book “Leader Business,” which contains all of his advice for creating strong leaders in the business community.