Good leaders treat others equally and seek opportunities to advance

“Most of the lessons in the military are basically people lessons — how to handle people in a consistent manner, particularly people that you’re working with,” said Clark Hudson, an attorney at Neil Dymott and a former Marine. “If they know what you expect and you’re consistent with what your expectations are, it makes the working relationships easier.”

In his legal career, whether he’s dealing with a client, judge or opposing parties, he tries to approach them in a consistent manner so they can understand who he is, what he expects, what he intends and how he operates, Hudson said.

In the Marines, Hudson had to deal out military punishment if someone was AWOL, if he or she didn’t perform well on the physical fitness requirements or if he or she had in some way fallen short on the duties.

“Logically, you’ve got to deal with them differently because if you didn’t perform well on a physical fitness test, that’s not the same as being AWOL. AWOL is certainly more severe,” Hudson said. “You have to figure out what’s an appropriate response to whatever the deficiency was, but you also have to make sure that that is dealt with evenly from person to person.”

Hudson joined the military when college didn’t provide an answer to what he should do next. He graduated from the University of Arizona with a bachelor’s degree in psychology. His father and grandfather had been in the military, and so he decided to try out a tour of duty to see if he could discover what to do with his life. 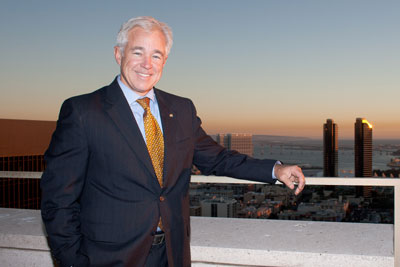 “My father was a three-star general, so I figure I had 21 years of service before I became a second lieutenant in the Marine Corps,” Hudson said. “My dad, when I was in the Marines obviously he was still my dad, and as ‘the general dad’ he would give me friendly advice every now and again.”

One piece of advice from his father that really stuck to Hudson was to seek opportunities.

After he left the Marine Corps, he decided to go to Washburn University of Law. Hudson had an interest in law prior to joining the Marines and said nothing in the Marine Corps made him choose law.

“I was one of those kids that thought that only people that did really, really, really well in English or political science, or were kings or queens of crossword puzzles, were the folks who became attorneys. I didn’t think I was smart,” Hudson said. “After getting out of the service, one thing I figured out is that you don’t have to be the smartest kid in school to get into law school. So I figured I might as well go ahead and apply and see what opportunities opened up.”

After graduating from law school in 1990, Hudson was offered a position at Neil Dymott, but was called back to the military as a captain in support of Desert Storm.

As a young attorney, he used the skills he learned from his dad and the military to gain more responsibility and, in his first year out of law school, he was trying lawsuits.

Hudson tells the young attorneys in his office to do the same thing and that they’ll receive the amount of experience they want if they keep after it and keep asking.

“Leadership is getting people to work together for a goal,” Hudson said. “Management, on the other hand, is more of a personnel issue where their responsibility is to help with the staffing — not necessarily be the individuals that motivate.”

The military also taught Hudson to make a decision and proceed with the plan and adjust as necessary.

“That’s certainly something in the legal world that serves us well. We look at a matter and we make a plan. And most of the time, when we’re defending the case in the manner we think it should be defended and pursuing the issues that we think are important, we’re right and they’re going the way it should and it goes the way it should,” Hudson said. “But there’s probably that 10 percent of cases that take a turn nobody ever saw. There’s information that was never available. And so, consistent with military training, as soon as there’s an obstacle, an obvious change, you’ve got to change with it instead of just continuing on a path that’s going to lead you nowhere.”

Hudson wanted to work with a firm that handled professional liability defense, and he found that at Neil Dymott in 1990 and hasn’t left since. Four other people in the office were also called to serve during the same time period, Hudson said.

“Being an attorney that works in this arena, you get to defend the folks that you think righteously should be defended. And the horrendous ones, 99 percent of the time, you’re settling it to make sure the people on the other side are being made whole,” Hudson said. “Typically, day in and day out, you’re feeling like you’re doing the right thing.”