Leaders can make or break the careers of those who serve around them. In the case of retired Rear Adm. Jose Betancourt, a former surface warfare officer, one leader almost broke his career and another picked up the pieces.

Betancourt was born in Mexico and moved to Texas when he was 8 years old. His dream was to teach at a college. He was a high school teacher in 1971, when he received a fellowship to earn his doctorate and then teach.

His number came up in the draft lottery that year, so he joined the Navy. The uniforms were sharp, he could travel and he could be done in three years.

Instead, Betancourt retired from the Navy as a rear admiral 34 years later, in 2005. He started a company, Global Source Energy (GSE), in 2012 and has been consulting through the Tesoro Veterans Group since 2006.

As a lieutenant during his fourth year in the Navy, though, he almost saw the end of his career.

“On the same ship I had first the worst commanding officer I've ever worked with and for," Betancourt said. "And then, when he was relieved, I worked for the best commanding officer I have ever worked for. In the case of the first one, the reaction to imperfections in people was rage and yelling and screaming and berating people. That individual had no confidence in himself whatsoever and did not inspire any of us to want to make a career.” 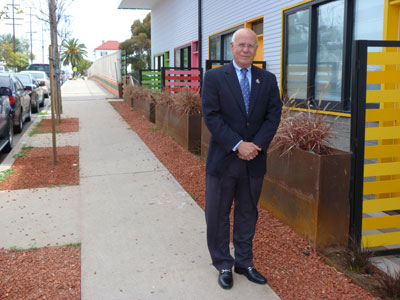 “He was the model of the perfect commanding officer," Betancourt said. "He had been a former enlisted man and rose through the ranks. He dressed sharply, he valued people, he allowed us to make mistakes and he was a good teacher."

Betancourt said there are two kinds of leaders — those who seek praise for succeeding but none of the blame for failing, and those who accept both the good and the bad.

The former leader “tends to be ill-tempered, unforgiving, can be ruthless and can be destructive of morale.” The latter has confidence in himself or herself and takes responsibility while not blaming others. That's the kind of leader Betancourt said should always be emulated.

Betancourt learned the importance of mentorship early in his career. He learned to pattern himself after the behavior and style of a successful leader.

“I used the same leadership principles they did: their comportment, their behavior, the way they treated people, the expectations they held of people," Betancourt said. "It's no secret with respect to how you succeed, but it’s learning the kind of temperament, the kind of style, that leads one to be successful."

Delegation is important for any leader, he said, because “you learn you cannot ever, ever, ever do it on your own. There's nothing wrong with being a perfectionist in some instances, but not being able to delegate and trust people can be a very common failure on the part of leaders that one has to watch for.”

The Navy's system of promotion is competitive, which allows for more qualified people than there are slots to fill, Betancourt said.

“You're able to pick from the best and most qualified individuals, and that hopefully produces the right people with the right abilities and the right talent to assume greater responsibility within the Navy,” Betancourt said.

To move through the ranks, one has to demonstrate technical knowledge and capability as well as the common sense it takes to be trusted, Betancourt said.

“In the Navy, it's about leadership and management of people. Because those of us who are blessed to have had wonderful careers in the Navy owe so much success to those who worked for and with us,” Betancourt said. “Recognizing early on in the career that we are only as good as the people who work for us is important, and that therefore puts a responsibility on one, on me, to be able to allow for the people I was privileged to lead and command to have the opportunity to grow as well.”

Betancourt was able to use his native language to strengthen relationships with Mexican counterparts when he managed shore installations and infrastructure and commanded mine warfare.

“The Navy tries to use skills you've developed,” Betancourt said.

When he came to San Diego he served as Navy region commander, which is like being the Navy mayor, he said. He wasn't driving or commanding ships, but he commanded all the bases.

One of Betancourt’s most important lessons learned is to strive to make recruiters out of all who leave the military service or a company.

“Even if the person … only works for you for four years, when he or she leaves the military service, strive so that that person leaves with a feeling of accomplishment and he in turn becomes a good recruiter for us,” Betancourt said.

And one of the greatest satisfactions Betancourt derives is when someone who served with him 20 to 25 years ago approaches him and says he had an influence on his or her life.

Also while in the Navy, Betancourt recognized the importance of weaning the United States from a dependence on foreign oil and fossil fuel, and that's why he started GSE.

“I'm not against fossil fuels," Betancourt said. "I just think that overdependence on fuel that powers our economy and overdependence on countries to the extent we import so much of our oil isn’t necessarily good for us. There are ways we can harness alternative energy sources. While I don’t think solar and wind will ever be the complete answer, they have a tremendous role to play in reducing that reliance on foreign oil.”

Betancourt's interest is in renewable energy, particularly the technology of photovoltaics. His company builds solar-producing facilities and Betancourt manages the construction for companies that incorporate energy-saving measures, such as retrofitting homes with new windows, insulation or energy-efficient appliances.

“We have so much land and so much of our region has the resource which is free — the sun — that we ought to capture that and use it,” Betancourt said.

GSE has three ongoing projects in California: a large one that will generate 141 megawatts and two smaller projects of 5 to 10 megawatts each.

Betancourt uses the planning skills he learned in the military at GSE.

“I don't approach anything haphazardly,” he said.

Betancourt said he is proud to be an American and feels an obligation to give back. He is chairman of the San Ysidro Education Vanguard Foundation's board that develops and executes programs to raise students’ academic achievement in science, technology, engineering and math.

“I think I'm going to stay busy until the day I die,” Betancourt said.

I love this man! He is a great person inside and out and I admire him tremendously! What he is doing with GSE is wonderful and should be considered by our government as well!

Great piece about an american hero.