Oceanside's North County Transit District is shaking things up in the transit industry. A new business model, new buses, lower fares, customer improvements, and a lean and mean, forward-thinking board of directors and management team are combining to create more riders and more revenue for the transit district which operates COASTER trains, SPRINTER light rail and BREEZE buses.

• In early 2009, amidst the worst economic crisis the country has encountered in a generation, North County Transit District was faced with a looming budget deficit of $15.5 million and two vastly different approaches for how to address it.

The agency could choose to eliminate jobs, increase fares and reduce services or it could make radical changes to its organizational structure and operations. 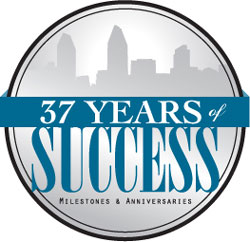 • The Board of Directors, noting a responsibility to fulfill its commitment to taxpayers and customers to provide services, reached consensus on a new business model that utilizes a strong network of public/private partnerships.

- The board's actions erased a structural budget deficit and provided for a balanced budget going forward.

- By working with the private sector, along with other cost reduction measures, NCTD is projected to save an estimated $50 million in taxpayer money over the next five fiscal years.

• After implementing changes to its business model to improve its financial condition, NCTD set measurable, strategic goals, outlined in a business plan, to hold it accountable to customers and taxpayers.

- The district is now on strong financial footing to meet its current and future obligations.

- NCTD has identified the funding sources for the $87 million needed to fully implement Positive Train Control, a federal mandate that must be online by 2015.

- NCTD undertook a complete evaluation of its fixed-route bus services and developed a Mobility Plan, designed to maximize use and minimize inefficiency by focusing service in the areas of highest demand.

- NCTD continues to look for new revenue sources from its real estate assets as well as identifying new advertising opportunities, such as wraps of the COASTER and SPRINTER rail cars. 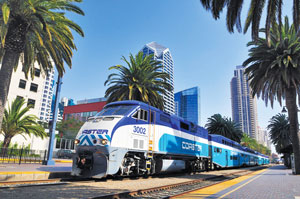 Commuters between downtown San Diego and Oceanside enjoy the COASTER with its free Wi-Fi on select cars.

The new business plan has put NCTD on solid financial footing. Investing in the system is up with a $12 million jump in capital improvements such as new bridges and technology. The transit district continued to buck national trends by lowering fares in January, 2011 while at the same time expanding service — 80 percent of transit services nationwide have done the opposite.

NCTD's ridership is up system-wide with a 23.6% year-over-year increase in COASTER ridership and a 13.7% increase in SPRINTER ridership leading the way. After closing a five-year, $80 million budget gap NCTD has increased its financial reserves from $0 to $15 million. The numbers are only part of the story. Customer improvements like free Wi-Fi on select COASTER cars are adding to passenger comfort. The district continually looks at ways to improve its routes such as creating a new BREEZE bus route that takes passengers from the SPRINTER station in Escondido to Palomar Health's new hospital and nearby Stone Brewing Co.

The wayside horn pilot project in Del Mar has been lauded by residents who praise the quieter horns and may be the model for other neighborhoods and cities. The Positive Train Control system is being developed which should greatly enhance safety on the rail tracks. Other improvements on tap for the near future include a text messaging system that will let passengers get real-time arrival information. The first-ever customer appreciation day will take place on November 16th at the Oceanside, Vista and Escondido Transit Centers and the Sorrento Valley station. March 9, 2013 the district will honor the fifth anniversary of the SPRINTER light rail system which runs between Oceanside and Escondido.

Clearly, NCTD is giving the community and its passengers plenty of reason to celebrate.

The only reliable thing running is the joke about the nctd service. Buses are chronically late or 'no shows'. Services are being changed for the WORSE, not better. 309 was reduced for an area that seniors depend on. Now a senior in his 80's has to use his walker to walk a mile to the next nearest bus stop. Mission Ave and El Camino Real has had more pedestrians shoved out to that island located at a very busy and dangereous intersection. Now nctd wants to do the same at 76 hwy and College Blvd because they no longer want their buses in the safe, and easily accessible, location at the Town Center stop. They are blaming Walmart for the change. That's a bold faced lie. Walmart management is very concerned about the looming change because it will effect some of their own employees as well as a lot of customers.