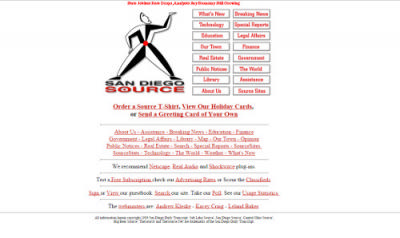 It was 1994. South Africa held its first interracial elections, the Dow Jones Industrial Average kicked off the year at 3,754.09, "The Lion King," "Friends" and "Forrest Gump" were new to screens, Sony’s PlayStation had just hit the market, and the San Diego Daily Transcript became the first newspaper in Southern California — and one of the first in the world — to add a website component to its distribution channels.

“The Internet, to me, hadn’t been invented yet,” said Andrew Kleske, now reader outreach editor at U-T San Diego, but the managing editor of The Daily Transcript in 1993 before his role changed into that of Web editor. “It was something only academics played with.”

One such academic and “true visionary” — in the words of all parties interviewed — was Bill Revelle, professor of psychology at Northwestern University and chairman of Calcomco, which acquired The Daily Transcript in 1986. Revelle recognized the power of the Internet and personal computers early on and had been waiting for the advent of a graphical interface to make a news website possible. When Web browser and interface Mosaic launched in 1993, Revelle didn’t waste any time.

“When that came out, Bill brought [the software disk] with him and he came onto the editorial floor and took me along,” said Bob Loomis, publisher of The Daily Transcript. “He walked into the meeting room … tossed it in the middle of the table and said, ‘There, ladies and gentlemen — you’re no longer working for a newspaper.’”

The concept was still so new that no one was entirely sure what a news website, much less a business news website, should or would entail, and not everyone was happy about the change.

“It’s important to understand, because it looks really inevitable in 2014, but 20 years ago nobody had a clue,” said Jan Loomis, wife of publisher Loomis who has a background in publishing and content management. “In 1994, they really didn’t have a clue. The big explosion on the Web was in 1996 -- in 1994 it was really out there in geek-land.”

Some of the editorial staff embraced the announcement, but Bob Loomis and Kleske both said there were many — within the Transcript and at other local papers — who thought it was a foolish move, bordering on sacrilege.

“As a management problem, it was a nightmare,” Bob Loomis said. “The editorial department thought this was a joke, a waste of time. They were adamantly opposed to it. Several resigned at different periods of time.”

The sales department had a split of its own, with many arguing that, at best, the website would always be a "secondary buy."

Gary Shaw, editor of The Daily Transcript during this time of transition, was one who said it was a hard pill to swallow.

“I hated hearing Bill and Ed [Frederickson], president of Calcomco, preach at us about how newspapers were dying, but they were almost perfectly correct,” Shaw, who is now assistant news editor at Investor’s Business Daily in Los Angeles, wrote in an email.

Outside the Transcript, the industry was equally divided.

“I remember people telling me, ‘That’s the smartest thing you guys could have done,’ but others said, ‘The Web’s a fad, it’s going to be gone in a year,’” Kleske said.

Under the leadership of Bob Loomis and the strategic vision of Revelle, The Daily Transcript went ahead with the move, not only creating its San Diego Source website, but undergoing an entire shift of purpose.

“We no longer saw ourselves as a newspaper," Loomis said, "but as a news, data and information company with multiple distribution channels.

There’s still this magic about a newspaper. In fact I was listening to Murdoch talk about this the other day; regardless of the fact that newspapers have been rejected by the majority of people in our reading world, newspaper organizations don’t understand that they’re not newspapers — they’re there to provide information to people, and that’s what we’ve been saying right from the start. That was Bill’s vision.”

After getting a bid price of $45,000 to $50,000 from SAIC to build what would now be considered a simple 10- to 12-page website for The Daily Transcript, the company decided to go a different, cheaper, but possibly riskier route and build the website in-house.

But how to build something with no real blueprint? Kleske, representing the editorial department; Greg Dunlap, from what would now be known as the IT department; Tom Kelleher, an advertising manager; and John Doe from production, were moved from their departments, set up with several Apple Macintosh computers in a large third-floor room that was formerly the publisher’s office, and simply told by Loomis to figure out how to pool their knowledge, study some written materials and make a website.

The San Diego Source site was built and developed in its early days in full view of those relatively few people then surfing the Web.

“About three or four days into it, I hear this shout go up, and sure enough, somebody had hit the website from outside and they were all excited,” Loomis said.

Kleske said it took the team about six months to create a product they were really proud of, and the San Diego Source officially launched in late 1994 after almost a year in development and beta.

The San Jose Mercury News beat the Transcript to the Web by a few months, but it would be another year before U-T San Diego went digital. The North County Times added a Web component after the U-T, according to Kleske, though they did so piecemeal, starting first with just the entertainment section.

Instead of having the Web and paper components as separate business units — which is how many news outlets are still structured today — the two channels have always been one-and-the-same business-wise and editorially. The editorial staff works on both the paper and the Web, and when reporters file stories, they file only once into a proprietary content management system that allows editors to allocate stories to the Web, paper, or both, from one system.

The same is true of entering The Daily Transcript's/San Diego Source's data, which is so important to business users. Construction bids, foreclosure information, lawsuits, public notice advertising and much more are entered once into the CMS and appear where directed by an editor in print and online.

The San Diego Source was also unique at the time in that parts of the site, such as the Plan Room and Attorney Directory, required a subscription from near the beginning until roughly 1997, when the number of online visitors was high enough to warrant a sitewide paywall.

The decision to go digital had several implications in the early days, one of the most important being that The Daily Transcript's editorial and advertising efforts were equal with larger organizations.

“What it allowed us to do right out of the chute was compete against the other news organizations in town that we just could not do before,” Kleske said. “We were a circulation of 12,000 or 14,000, compared to major dailies like the LA Times and U-T that were printing off hundreds of thousands of editions. Well, going online meant we were on a playing field with these guys.”

It also led to high praise and even copycatting. The Daily Transcript earned a Maggie Award from the Western Publishing Association for its innovative product. It also was awarded the San Diego Society of Professional Journalists’ award for best coverage of the Republican National Convention in 1996. Loomis sent reporters to the Convention Center with computers to report and write directly from the event, which was an unheard of concept then, and caught CNN’s attention with several of its design choices.

“The first time another website steals one of your ideas, it feels like you made it,” Kleske said. “We had a little red ball write headlines across the screen and then disappear, then write a new headline — it was the coolest thing we ever built. A few weeks after, CNN was running that little red ball. Rather than think ‘Hey, they stole our idea,’ being the time of collaboration that the Web was, we thought ‘Hey, we developed something important that someone else wants to use!’”

The Daily Transcript built an interactive county map completely from original HTML, which earned a “happy face” from Yahoo in this same period of time. Soon, several other sites had similar features.

Being so cutting edge also led to laughable moments, given how the years in-between transpired. In about 1995 or 1996, the Transcript decided to take a camera to a Chargers game to broadcast the game online.

“We took a camera and our computer with us to the skybox that we had at the time to a Chargers game, and we did a live broadcast from the box,” Loomis said. “And the NFL didn’t care. We said ‘Do we need permission?’ And they said ‘What, for a computer?’”

How times have changed, and now almost every organization understands the power of the Web. The Daily Transcript and San Diego Source have seen their share of changes in the last 20 years as well, including a significant website redesign in 2002. Prior to that, the website didn’t incorporate any of the paper’s design schemes, so Kat Schmitt, who was integral in the redesign process, said tying the newspaper and website together more clearly was a priority, as was including more news and functionality.

“It had been a very image-based front page, and that was great for the time, but what we needed to do was start being able to show more of what was contained within the website by just bringing up links from within,” Schmitt said. “We had to keep it within a certain size limit — because at the time, computer monitors were only so large and we were designing for the lowest-common denominator. I tried the right-handed navigation and, love it or hate it, at least it made it easier to access other parts of the website. As you went further into the website, then you started finding more of the left-handed navigation for news stuff.”

A lot has changed since 1994, but the core principles behind San Diego Source remain the same: Give users the most useful information in the fastest, easiest manner.

“You have to rethink what really it is that we’re doing,” Jan Loomis said. “I think a lot of people didn’t want to -- or couldn’t -- think back to what they were really doing; they thought they were printing a newspaper, but they didn’t say ‘Before the press, what was I doing 500 years ago?’ It’s distributing information.”

Among the ways The Daily Transcript now distributes its information digitally includes email newsletters, the first of which -- "Today's Headlines" -- launched in 2003, and some readers rely on four to five Daily Transcript emails a day for their news and information. The Transcript began producing videos in 2007 and has posted hundreds since. Also, using HTML5 and CSS 3, the site was converted to a responsive Web design in 2013, which gives an optimal viewing experience across desktop and mobile devices. All of these digital products and more have been developed by long standing IT staff members, led by manager Joseph Schmitt, who began as a programmer in 1997 and took the IT helm in 1999.

For its efforts, the website was awarded Best of Show by the San Diego Press Club in 2013, the latest of almost 200 awards and recognitions attained by the website and its unique content in the last 20 years.

And while the other news sites in town have in some ways caught up, in many ways the San Diego Source still stands out for the sheer amount of data and tools packed into the site for its targeted users.