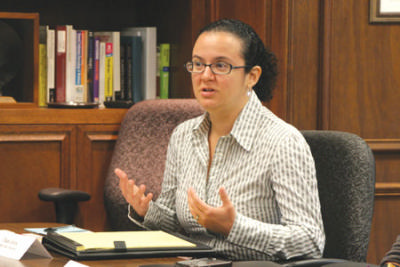 The future labor workforce of the electrical industry in San Diego is going to come from people out of an apprentice shop or a four-year university, with a good amount being military veterans, as local entities are already aiding this cause.

This was the sentiment at a roundtable discussion held at The Daily Transcript on May 31.

According to Andy Berg, manager of the National Electrical Contractors Association San Diego chapter, sponsor of the roundtable, unemployment is approximately 15 percent in the local electrical industry right now and around 10 percent in a healthy economy.

He added that the current electrical employment rate is worse than 15 percent, when you consider that around half of contractors work less than 40 hours per week.

NECA San Diego has a five-year apprenticeship program, which starts up every year, and trains whoever wants to be a licensed electrician after the candidate passes an interview process.

“I try (as a committee) to get on these guy and tell them ‘we are not just training you to be a run-of-the-mill electrician,'” said Berg, adding that it costs NECA and its members $20,000 per year to prepare each individual. “We are trading you to be a leader … I expect everyone to become a foreman.”

This year the chapter will graduate 86 journeymen.

NECA also allows any military veteran to join its apprenticeship program, and for the most part, transition well from military to the civilian workforce.

Pete Spencer, president of Audio Associates of San Diego, said his company brought on a Navy lieutenant commander and top gun pilot of 20 years, who went through the apprenticeship program.

“He made it to the top, started at the bottom, and went up to the very top (again),” said Spencer, who served six years in the U.S. Coast Guard. “He was great, one of the best workers we had.”

“The best thing about (military veterans) is that they are mature and they know how the process works,” Davies said, adding that they know chain of command. “It goes back to their work ethic.”

Monster.com recently released a report stating approximately one million veterans will enter into the job market over the next five years. Of the 900 veterans and 900 employers surveyed, 75 percent of veterans feel they have the skill set to enter into the civilian job force, however only 39 percent of employers believe veterans are ready.

Robert Friar, president of Chula Vista Electric Co., said his company is trying something a little different. It posted a job opening, specifically looking for someone with military experience to run the company’s IT department.

“We are looking to take someone that already has their training in the military and bring them in to expand what we are doing in the office,” said Friar, adding that he wants a structured, grounded candidate.

A challenge for veterans has been the ability to adjust and transition back into civilian life.

Friar explained that his company has consulted with family and friends of candidates who served in the military, to see where their mindset was and to see if they could assimilate back into the non-military workforce.

“They are in a different environment and I think you need to be careful with them when you bring them (on),” Friar said, adding that the company has made a conscious effort to fully explain wage packages, dress code and what is expect of performance and behavior to potential employees.

Training for a career in the construction industry is also occurring at San Diego State University.

In January 2011, SDSU received funding from the National Science Foundation’s Troops to Engineers and S.E.R.V.IC.E. (Success in Engineering for Recent Veterans through Internship and Career Experience) programs to provide special services to veteran students, including assimilation assistance and employment.

The university also received a $100,000 pledge last month from the Northrop Gunman Foundation for the Troops to Engineers program.

Thais Alves, assistant professor at San Diego State University in the J.R. Filanc Construction Engineering and Management Program, said she and her colleagues are teaching veteran and non-veteran students to use newer technologies and tools like building information modeling so they can be better prepared to enter into the construction fields.

“It’s attracting students who love to play video games,” Alves said. “We certainly have to address students and teach them these new technologies.”

She also added that the J.R. Filanc Construction Engineering and Management Program is also imploring students to learn about sustainability and know how to construct with U.S. Green Building Council LEED standards in mind because employers want these skills.

“We are trying to raise awareness about careers in the electrical industry,” Alves said. So much so that NECA now has a student chapter at San Diego State. With the help of the local construction industry, 20 of the 23 graduates from the 2012 construction engineering and management program have jobs.

Alves added that the college of engineering is working with all sectors of the construction industry in San Diego and across California to make sure more students have jobs once they graduate.

One of these companies is Southern Contracting Co. Tim McBride, president and CEO, said his firm has hired two graduates from San Diego State with construction management degrees.

“I’m looking for the 3.0 and 3.5 (grade point average) kid,” McBride said, explaining that students coming out of any of engineering and construction university programs have a vast knowledge, but sometimes lack enough street smarts. “I’m looking for the practical smarts along with the book smarts.”

To get some of this practical and streets skills, Alves and her colleagues are telling their students they need to do an internship during their time at SDSU.

“The industry has been very supportive in this regard,” Alves added.

“We take a team, give them a project, and they compete nationally,” said Karen Prescott-Loeffler, director of local government affairs and economic development for the National Electrical Contractors Association San Diego chapter.

She explained students get local contractors as mentors, who take students on job walks and learn from project managers and estimators on an active project. They then take these lessons and apply them to what they have learned in the classroom to create their Green Energy Challenge project, which consists of retrofitting and modernizing an existing building.

Last year, SDSU students came in fourth place in the county, competing with larger universities like Texas A&M and Penn State. 2011 was the first year SDSU students entered into this national event.

Alves said students who participate in these competitions get multiple job offers because of the skills sets they pick up.