While the U.S. economy continues a pace of modest growth, local banks are holding steady or showing signs of improvement over previous quarters.

The most recent bank star ratings compiled by Florida-based independent analysis firm BauerFinancial showed San Diego County banks remained largely unchanged from the previous quarter. Only one bank saw its rating change, and that was an improvement of half a point.

BauerFinancial assigns star ratings to U.S. banks and credit unions from financial data as reported to federal regulators. The ratings are based on capital ratios, profitability and loss trends, levels of delinquent loans, charge-offs and repossessed assets, market versus book value of investment portfolios, liquidity and historical data, among other criteria. The ratings go from zero to five stars, with five being the best.

According to BauerFinancial’s system, five stars equals a “superior” bank; four stars is “excellent”; three and a half stars is “good”; three stars is “adequate”; two stars is “problematic”; one star is “troubled”; and zero stars indicates severe problems. Some banks are listed as “unrated,” generally because they are new and haven't been able to provide sufficient data.

As in the previous quarter, San Diego had seven five-star banks. One of these, Embarcadero Bank, completed its merger with three-star Coronado First Bank in November. The combined bank now operates under the name Coronado First Bank, and trades on the Over-the-Counter Bulletin Board under the symbol “NADO.”

Neighborhood National Bank remained the lowest rated with two stars. Sunrise Bank, also rated two stars in the previous quarter, agreed in June to be acquired by Spokane, Wash.-based American West Bank after it was told by regulators to develop a plan to recapitalize itself.

The only bank to change its star rating was La Jolla-based San Diego Private Bank, which went from three stars to three and a half.

“I’m happy to say that the banking results have stabilized over the last few quarters and are even showing some improvement,” said Karen Dorway, president of BauerFinancial. “It will be an ongoing process, not so much as turning a corner as rounding a bend, but we appear to be headed in the right direction.”

“Overall, capital ratios and profitability are up while delinquent loans are down. The pace of the progress of community banks will no doubt directly correlate with the local economy,” Dorway said.

Nationally, demand for business loans increased in the fourth quarter as economic growth accelerated, according to a Federal Reserve survey of senior loan officers at 56 banks across the country. The economy grew at 2.8 percent in the last quarter of 2011, the fastest pace since the second quarter of 2010 — though still below the Wall Street forecast of 3 percent.

The most recent BauerFinancial data showed more than 42 percent of U.S. banks and credit unions earnings its highest five-star rating, suggesting “the nation’s financial system is on the mend.”

One star (troubled): None 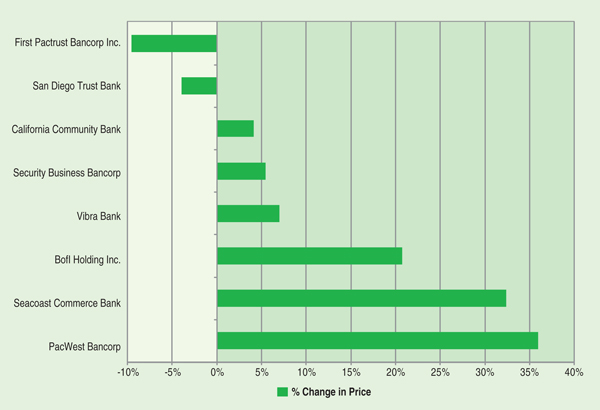