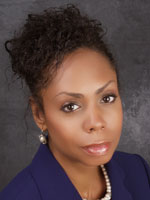 Aldrica has a B.A. in Education, B.A. in Social Work, and M.B.A. in Public Policy & Administration starting her career as a Teacher in the most challenging New York school districts by choice -- "I always felt that children in dire communities needed the best teachers, and I was one of the best!" Aldrica went on to administrate both public and private educational and human service agencies for over a decade.

Over the past 18 years through Aldrica's leadership Accurate Engineering Integrated Construction Services Inc. has gained over a decade long track record of consistent outstanding performance evaluations, meeting or exceeding the demanding requirements of commercial, federal, military and utility customers.

Keeping her educational roots' never far way, Accurate Engineering has maintained a Partnership in Education relationship with the San Diego Unified School District since 1998; Accurate Engineering's has provided academic internship programs for colleges and universities for over a decade; Accurate Engineering is a State of California approved Apprenticeship Training Site; and Aldrica has mentored and advocated for small businesses for as long as she has been in business.