Infill projects get chance to shine, though hurdles remain

The toils and rewards of smaller infill and mixed-use developments were the topics of a morning meeting of the San Diego/Tijuana Chapter of the Urban Land Institute at the University Club on Tuesday.

Naslund said residents near a given project shouldn’t be afraid of density.

“A project may become more dense, but graceful,” Naslund said.

Lloyd Russell, an American Institute of Architects designer who heads Lloyd Russell AIA, said after graduating from Cal Poly San Luis Obispo in the late 1990s, he had a choice of going to San Francisco or San Diego to work.

“I had to decide where I was going to be an architect. I felt that San Francisco was done, while San Diego was a blank canvas, and that is kind of inspiring,” Russell said.

Mike Burnett, an architect and developer for Foundation for Form Architecture & Development, said a development along 25th Street in Golden Hill known as “You Are Here” is now in the process of being completed. The mixed-use development replaces a 1960s-era gas station with 22 multifamily residential units, about 5,000 square feet of ground-floor retail, and a small pocket park at the end of a cul-de-sac.

Burnett said while there is nothing particularly special about the former gas station site, the property is close to an Irving Gill home, as well as being an integral part of the 25th Street revitalization effort.

The You Are Here property is across 25th Street from another Foundation for Form development known as mxd 830, a much smaller property that has just two multifamily units with a restaurant on the ground floor.

“That property has a bistro/bar that isn’t even 800 square feet, and yet the street is now active at night,” Burnett said. “We’re looking at getting the business owner a bigger restaurant nearby.”

Russ Murfey, Veritas Urban Properties principal, is the developer of The Point at Ingraham, a 21-unit multifamily project in Pacific Beach that is currently under construction and scheduled for completion by the end of this year. 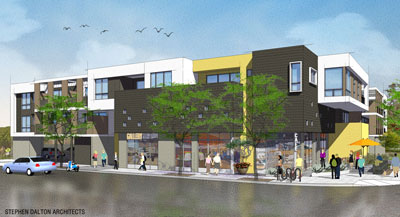 A rendering of The Point at Ingraham, a high-end, transit-oriented, urban mixed-use project. With 2,268 square feet of ground commercial space, and 21 residential units above, the property will include 45 parking spaces behind the building (including retail parking), plus plenty of room for bicycles. Photo courtesy of Stephen Dalton Architects

While at CityMark Development -- his previous employer -- Murfey oversaw the entitlement and development of more than 1,000 residential units, 60,000 square feet of commercial space, $150 million of financial placement and $500 million in real estate value.

Murfey said he takes pride in making a community better.

“There’s a lot of crap out there that gets built, whereas I get inspired by improving the fabric of a neighborhood,” he said.

Before a project improves a community, it first must be built. Russell said his biggest challenge is not having clarity from the city as to the procedures that must be followed in order to get a project approved.

“The rules are unnecessarily complicated,” said Russell. “Up in Portland (Oregon) I was inspired. It was mostly about incentives and bonuses, rather than what we couldn’t do. Here we have a betting pool on the interpretation of the zoning. It’s a weird process.”

Naslund agreed that the zoning code needs an overhaul.

“It’s definitely a challenge to get through. Unfortunately, most land-use law is written in a reactionary way,” Naslund said.

Burnett said he is frustrated with the appraisal process.

“Sometimes the appraisal guy doesn’t get that this wall moves, and that makes a difference in the appraisal,” Burnett said.

All seem to agree that parking ratios for these small developments are a huge issue.

“It’s really a shame,” said Murfey. “The first thing you do is look at the parking and then you build the project around it."

Russell said parking is the biggest land-use constraint he faces with his projects.

“Portland had no such parking requirements. In fact they had parking maximums,” Russell said, adding that he did have trouble getting a loan for a project since being told by a lender that he didn’t have enough parking for the development.

When asked what kind of lenders should finance the small infill and mixed-use projects, Murfey cited his lender, Torrey Pines Bank among others.

“A local bank is a good place to start,” Murfey said.