According to McGraw-Hill Construction, permits were pulled for what will amount to $73,375,000 in residential construction, a category that includes both single- and multifamily homes.

January’s total represented a 41 percent drop from the January 2012 residential permit total of about $125.19 million.

The picture appeared quite a bit different for California as a whole. McGraw Hill reported $948.87 million worth of residential permits were pulled in January -- or 9 percent more than the roughly $871.14 million in such permits pulled during the like month in 2012.

Nonresidential construction in San Diego County, which includes all commercial building along with nonresidential alterations and additions, amounted to $497.33 million in January 2013 -- or more than double the $216.1 million figure registered in January 2012.

Nonresidential permit activity was less strong statewide in January 2013 when compared to January 2012 -- dropping by about 20 percent from $1.16 billion to $929.32 million year-over-year.

The McGraw Hill report didn’t break out non-building construction for San Diego County. This category can be a significant part of the total depending on the projects, which include everything from bridges to sewage treatment plants.

Statewide, non-building activity amounted to $1.2 billion in January -- or about 59 percent less than the roughly $2.96 billion figure registered in January 2012. 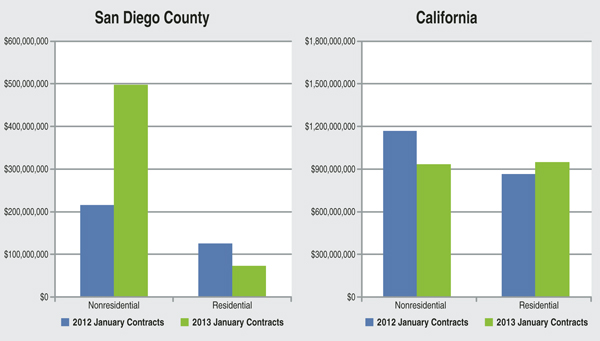