Home prices are skyrocketing in North Park, giving investors the advantage and leaving first-time homebuyers in the dust.

Minnie Rzeslawski, CEO and broker at Re/Max 24k in North Park, said prices in North Park shot up in 2011 when North Park went nationwide, attracting investors to the area.

“The big thing that’s going on here and of course everybody knows -- North Park is the hottest, hippest place to move here in San Diego County,” said Bill Vivian, a broker at Re/Max 24k. “With the low interest rates, the buyers are trying to get into North Park as quickly as they can.”

North Park became the spot to buy because of high gas prices and homeowners deciding to live locally, Vivian said. The charm of the craftsman and Spanish-style homes also brings in buyers, he said.

“A lot of people work downtown and North Park is centrally located,” Vivian said. “North Park is a suburb of Hillcrest and it’s cheaper than Hillcrest. Hillcrest was tapped out and pricey so people started spilling over to North Park.”

“In North Park, there are tiny cottages with a little bit of land. What investors are doing is they’re purchasing the two-bedroom, one-bathroom that need fixing. They’re adding another bedroom and another bathroom and selling it for $200,000 to $300,000 more,” Rzeslawski said. 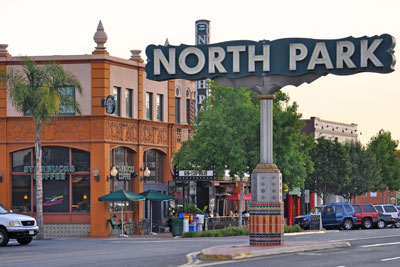 North Park is quickly becoming one of the trendiest neighborhoods in San Diego. The Birch North Park Theatre (pictured above), cheaper housing, quaint coffee shops and boutiques, and an emerging night life all contributed to Forbes’ decision to name North Park the No. 13 “best hipster” neighborhood in the country in 2012. Photo courtesy of Lisa Field, SanDiego.org

Those investors are pushing up prices in a market with low inventory, she said.

“When something comes on the market, there’s like 20 to 30 offers. Competition is very tough,” Rzeslawski said. “In a traditional market, you submit one offer and you wait for the seller to respond to you. In this market, because inventory is so low, we have to look at a lot of homes and we have to submit a lot of offers. Competition is really tough. There are a lot of agents still out there and a lot of buyers still out there. It’s taking anywhere from two to four months to actually get an offer accepted and closing.”

There is little inventory in all of San Diego County, she said, with some places worse off than North Park. She noticed North Park’s inventory start to decline in March 2012, when short sales were pulled off the market as more people turned to loan modifications.

As for shadow inventory, Rzeslawski said those San Diego properties were sold in bulk to inventors last year.

“Anybody who doesn’t have to sell certainly isn’t going to sell,” Vivian said. “Prices are going up quickly. Sellers are going to hold until the price comes up above the crash levels.”

“That excludes a lot of first-time homebuyers because they all need to get a loan,” Vivian said.

Those investors are flipping the properties and they are slowly coming back on the market, but with a higher price tag.

“The prices are skyrocketing and people are paying for it,” Rzeslawski said.

North Park detached single-family homes spent an average of 56 days on the market in February and 52 days year-to-date, according to SDAR. But Rzeslawski said that number is too high.

“The numbers are skewed because of short sales. Within two to three days they have multiple offers and then it just depends on when the seller wants to respond,” Rzeslawski said. 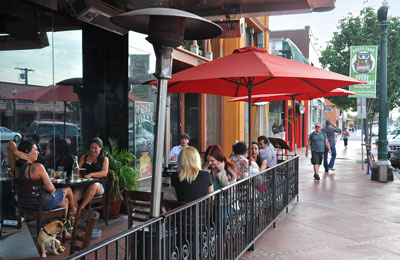 Not all of the buyers are investors. The owner-occupied buyers Rzeslawski sees are mostly in the move-up market – but moving up to a smaller house. People in their 20s and 30s like the area, she said, and she sees a lot of educators and doctors, with most of her buyers from San Diego.

“They’re here because of the North Park community,” Rzeslawski said. “The buyers are move-up because the prices are atrocious. You can’t buy a house here for $350,000 anymore. It’s more like $450,000s.”

“I see a few move-up buyers but I don’t think it’s the majority. I think buyers are probably sticking in their current homes because the economy is questionable. They’re waiting to see the job situation change,” Vivian said.

Rzeslawski works out of a boutique, Internet-café-style office on 30th Street. There are three people who work out of that office. Employees work from home and use the office to meet with clients, check their computer and print out offers and other documents. There are no closed offices, which is a concept Re/Max is testing out.

“Those offices, based on their experience, have seen more success than traditional Re/Max offices, because with traditional offices, you’re paying a lot of rent. The enclosed offices are 4-5-7,000 square feet,” Rzeslawski said. “This office is Internet-based. You come in on your laptop. It’s wireless. It has the amenities of a traditional office minus the enclosed private spaces.”

Rzeslawski started working in real estate in 1988 when she was pregnant with her oldest daughter and felt bored. She earned her real estate license but decided to do loans instead.

In the 1990s, she and her husband became investors, buying, flipping and selling homes. In 1998, she earned her broker’s license and opened up her own business under 24K International Realty. She’s been working in North Park since 2008 and in March 2012 she bought the franchise Re/Max.

Rzeslawski had three offices at one point -- one in Chula Vista, Barrio Logan and her home office.

She sold the Chula Vista office when the market collapsed and moved from Barrio Logan to North Park in 2008. She still operates 24K International Realty out of her home office in the Chula Vista area where, she said, there is slightly more inventory.

“Prices are going up, but not as much as in North Park,” Rzeslawski said. “There are still a lot of short sales down there and very few foreclosures, but you’ll see more foreclosures there than here. In the South Bay, you get more home for the same amount of value here.”

Rzeslawski sits on many boards, including the Housing and Economic Development Center. She helps counsel clients on foreclosures, pre-foreclosures, home buying and financial stability – which she also does with her clients. When a client asks her to list a property as a short sale, she said she asks questions to make sure that’s the right option.

“They’re being unreasonable, so they’re giving me a price to decline a short sale,” Rzeslawski said. “And I did. I followed their instruction because now they’re treating short sales like foreclosures in the system.”

Rzeslawski said she expects the current trends to continue through the year, with low inventory, more traditional sales and increasing prices. She doesn’t expect another 2007 bubble.

“There’s no way prices can go up that high. I don’t think buyers are going to let that happen. They’re more educated now – although they are paying more. I just don’t think that’s going to happen,” Rzeslawski said.

But Vivian isn’t quite so optimistic.

“I think there will probably be some kind of future bubble where things get derailed,” Vivian said. “For now, if we keep interest rates low for another year or two, we’ll just keep seeing the same thing, low inventory and multiple offers.”