By THOR KAMBAN BIBERMAN, The Daily Transcript
Thursday, May 9, 2013

San Diego-based OliverMcMillan said construction is under way on The Lofts at 688 13th St. in the East Village.

The development, being fueled with institutional funding from Capri Capital Partners, will consist of a five-story residential building fronting 13th Street between Market and G streets.

The project is expected to be complete in two years; its cost was not revealed.

Covering three-quarters of a city block, the new construction includes 208 mid-rise and ground-level apartments with studio, one-bedroom and two-bedroom residences ranging from 620 to 1,300 square feet; a 9,000-square-foot roof deck; and two ground-level retail spaces of about 2,660 square feet each.

Ground-level residential units will have floor-to-ceiling glass, separated from the sidewalk by gated terraces.

OliverMcMillan is widening the sidewalk to 22 feet on 13th Street, while landscaping is planned at the property line and on the street side.

Upper-level residential floors will feature murals by local artists. Inward-facing apartments on the upper level will offer views to a linear, landscaped courtyard and some city views beyond.

Inward-facing ground-level units will have direct access to private patios within the courtyard.

The development’s roof deck will feature architectural lighting, steel and wood trellises, lounge seating, several fire pits, an enclosed pet area, and views of the surrounding city and skyline. Other features will include a roof deck, Fully Fit Gym and media lounge.

“We are excited to be investing in San Diego, and to partner with OliverMcMillan in developing new high-quality residences for the burgeoning community,” said Ken Lombard, a Capri Capital partner, in a statement.

“With continued low vacancy rates and a steady demand for rental units in the East Village District, we see this project as a fantastic opportunity to add to the vibrancy of this neighborhood,” Lombard said.

Paul Buss, OliverMcMillan president, said The Lofts at 688 13th Street "is designed as a piece of sculpture, a poised and urbane presence."

"This thoughtful, architectural development reflects the spirit of the art community of the East Village,” he said.

Interior and roof deck design services are by the Jules Wilson design firm, while the general contractor is VCC.

The Lofts at 688, which is adjacent to the San Diego Trolley, is the latest Loft project developed by OliverMcMillan over the past few years.

Other such multifamily properties developed by the San Diego builder from 2006 to 2010 include the 106-unit Lofts at 655 at Sixth Avenue, and G Street at the edge of the Gaslamp Quarter.

The Lofts at 677, which features 147 units with two ground-floor restaurants at Seventh Avenue and G Street, has direct views into Petco Park. 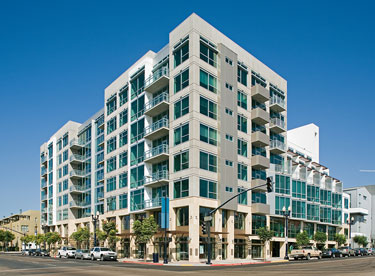 OliverMcMillan has a 207-unit property at 707 10th (above), just two blocks away from The Lofts at 688 13th St., currently under construction. Photo courtesy of OliverMcMillan

The Lofts at 707, at Tenth Avenue and G Street, includes 207 residential units, a rooftop deck and a movie theater.

OliverMcMillan is known for its transformative San Diego developments including the Uptown District that converted a 14-acre former Sears site in Hillcrest into a pedestrian-oriented, mixed-use complex; the Village Hillcrest development that added a rehab hospital, theaters, restaurants, a 24-hour gym and office space; and the Pacific Gaslamp Theatres development.

OliverMcMillan has been leading the charge in the ongoing transformation of Atlanta’s Buckhead neighborhood with new retail, residential and other uses.

On the Pacific Coast, OliverMcMillan has been planning a 129-acre Riverfront District development in Everett, Wash., expected to have about 1 million square feet of commercial and residential space at build-out.

Capri and its predecessor companies have acquired or originated more than $10 billion in commercial real estate investments.