By TONY LOVITT, Special to The Daily Transcript
Wednesday, June 19, 2013

By his own description, Dan Broderick's introduction to the commercial real estate business was “completely accidental.”

After all, he was just being a good Samaritan by giving a longtime buddy a ride to the East Bay one Saturday night years ago so his friend could meet “this real estate guy and learn what he did for a living.”

“I'll never forget, we were making Easter eggs with his kids and he was talking about commercial real estate and how much he loved the business,” Broderick recalled. “He was just so passionate about it.”

Totally unexpectedly and spontaneously, “the guy” dumbfounded Broderick and his buddy by offering both of them immediate employment with his commercial real estate brokerage.

“We were both laughing the whole time. It was the weirdest thing,” said Broderick with a chuckle, still amused by the improbability of it all.

When the laughter subsided, Broderick took the job, fell in love with the business and started on a fast track to stardom in commercial real estate. 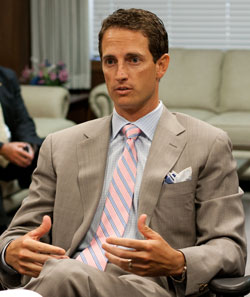 His buddy accepted a position, too, and never left. He now serves as president of the company, CM Realty.

But the East Bay wasn't where the San Diego-born-and-raised Broderick wanted to live and raise a family, after having earned bachelor's degrees in economics and psychology at Stanford University in 1998.

Three months into his gig at CM Realty, he left with the owner's blessing and returned home.

After considering many offers, he accepted a position as an office leasing broker with John Burnham & Company (now Cushman & Wakefield).

He joined Cassidy Turley two-and-a-half years ago, from Eastdil Secured, a subsidiary of Wells Fargo.

“We've had positive net absorption for a number of years now, ever since 2010, and we continue to have positive net absorption," Broderick said. "A lot of activity in the tech space, in the professional services space, and tourism and hospitality jobs have been healthy, coming into the summer months. So, in the life science, defense and professional services sectors, we're looking strong. Health care and education were big performers in this (recent) jobs report, as well, which is positive for the health of the market.”

“Apartments are the lowest, and you have industrial and retail that are sub-ten percent," Broderick said. "So those are extremely tight vacancy rates. (It's) about a 14 or 15 percent vacancy rate on the office side, but that's kind of the bellwether that everyone watches, the office sector.

"And when you get down to between a 10 and 12 percent vacancy rate, that's when you see speculative development, historically,” he said.

Among many projects underway at Cassidy Turley, Broderick said the firm is now working on the sale of a large-scale development owned by Prudential Investors and Alexandria Real Estate Equities (NYSE: ARE) called “The Heights.” 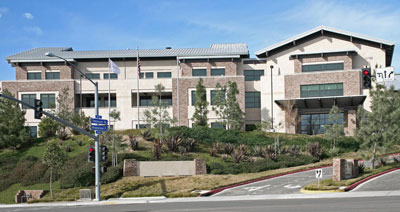 Cassidy Turley is now working on the sale of a large-scale development called “The Heights.” Photo courtesy of CoStar

The development is on El Camino Real in Del Mar Heights, which Broderick considers to be the high-end sub-market within San Diego.

“[The Heights] was a build-to-suit for Neurocrine [Biosciences Inc., Nasdaq: NBIX] back when they were a big tenant in the market. They're still in one of the buildings,” Broderick said. “But, it has a development component, it's on the newer side, it was built after the last cycle and is in the best location out there. Hopefully, we're just a few weeks, if not a month away (from closing).”

Downtown San Diego may not be what many consider to be a “hot” sub-market, but Broderick thinks its day is coming.

“I think there are four or five tenants looking in downtown that need over 50,000 feet, which is the first time that's gone on in awhile,” Broderick said. “In my humble opinion, I think that sooner or later, the value and the attractiveness of downtown will draw things back there. And it's not a matter of if, but when.”

Looking ahead, Broderick has some concerns, such as what's happening in China, the slowdown overseas and the turmoil and unrest in Europe.

“Then, of course, there's the volatility in interest rates,” he said.

But, the ups and downs of the market and interest rates are just part of the ride and Dan Broderick's ride in the commercial real estate industry has been pretty good one ... thanks to the ride he gave a good friend many years ago.