By TONY LOVITT, Special to The Daily Transcript
Monday, June 17, 2013

“Reputation is all you have and trust is the biggest foundation of that, remembering that the commercial real estate community is very small, remembering that it's just money, and remembering that, if you really have a passion for what you do and do the right thing each and every time, success is the outcome.”

“I loved playing Monopoly as a kid,” said Volen, recalling the genesis of his passion for real estate. “I grew up on the principal side in a small, family office (in his native Northern California), with a background in office, industrial and retail.”

His work ethic was instilled early.

At 13, he was doing leasing. At 15, the wunderkind was into construction management, doing demolition projects with a bunch of buddies. At 17, Volen was the one negotiating with brokers. 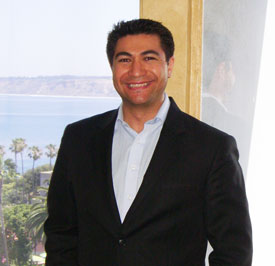 Volen earned a bachelor's degree in political economy of industrialized societies at the University of California in 2004. But, it was while he studied for a year in Brazil that Volen had an epiphany.

“I was thirsty for English, and I read a ton of books and everything that kept coming back was that there's two ways of making a lot of money ... selling money or selling real estate,” Volen said. “And when I came back [from Brazil], I didn't want to go into I-banking. That wasn't for me. Real estate was just kind of 'it.'”

At 21, Volen joined one of the nation's top investment brokerage firms, eventually becoming one of its top investment sales agents, nationwide. As a result, Volen earned the kind of serious trust and respect typically reserved for brokers much longer in the tooth.

“There's a great learning environment at the big firms," said Volen, who has 12, full-time agents in San Diego, as well as agents based in Los Angeles and Northern California. "But, the differentiation of where (CIRE is) today and where I was, is that we are always client-focused versus transaction-focused.”

While it may be the $25 million or $50 million corporate projects that grab the business headlines, CIRE Partners specializes in working with private individuals on lower-profile transactions ranging from approximately $1 million to $20 million.

“Most typically, and our firm's the bread and butter, is advising clients selling their industrial or retail building and exchanging them into multiple triple-net properties, doubling or potentially tripling their cash flow,” Volen said.

“I think that the strengths for San Diego [relative to commercial real estate] — and this has gotten better over the last ten years — is the diversity within the industries represented,” Volen said.

“It goes beyond just the military and tourism now and includes biotech, medical, pharmaceutical, and high-tech firms like Qualcomm," he said. "Also, we have something in California called the 'sunshine factor,' which draws a lot of people.”

“I think the positive is that there hasn't been a lot of over-development in the last four years. You're not seeing major developments just popping up.”

“But, let's see what happens with interest rates creeping up a bit this year,” he cautioned. “You can't continue to hold interest rates at three or four percent. It's not sustainable, (considering) inflation and not seeing the job growth that we're supposed to see to make up for that.”

“It's a work-hard environment,” said Volen, observing some members of his team of agents working across the hallway. “But the end game, everyone's vision, should be to become the guy on the other side of that phone. To become a principal and to have financial freedom through passive cash flow. That's the name of the game.”

As when he played Monopoly as a child, Joshua Volen is playing the game very well.

Great story on a great man. I have known Joshua a long time and have always found him to be ahead of the curve in intellect, integrity and work ethic. He is a results oriented individual, so it comes as no surprise to me that he making a difference in his community.