Foreign buyers haven’t made a substantial move to San Diego, but the CEO of Willis Allen is working to make sure they know the product is here.

“Because of the Qualcomms and all the biomed and genetic testing going on here, we’re starting to get a variety of foreign intellectuals,” Andrew Nelson said. “UCSD has actually been a boom to getting foreign people here, because they will come to this good school. … That and the health care system have brought a lot of people from out of the area that wouldn’t be grown-up San Diego residents.”

“We have not yet had Europeans come in great strength because they go to the East Coast. That’s far easier for them,” Nelson said. “If we take a look at Canada, they’re going to go to Vancouver and San Francisco. The Chinese — they love water. … And that’s why they go to Vancouver, San Francisco and Newport Beach. They haven’t come to San Diego in great numbers.”

“The foreign population is coming in from different sources, but it’s not a wave of substantial activity,” Nelson said. 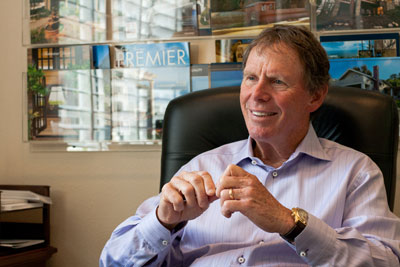 Willis Allen, which will celebrate its 100th year in 2014, recently joined the Christie’s International Real Estate group, which Nelson said “gives us the global outreach that we would not normally have.”

Willis Allen also belongs to a network of companies called Luxury Portfolio International, and distributes a magazine called Collection. The magazine’s purpose is to give exposure to the properties with high quality print and placement to connect with buyers both inside and out of the area.

Nelson joined Willis Allen in 1977 as the youngest employee at the time. He said the company was old, staid and conservative so he made some suggestions and was quickly named president in 1980. He bought the company in the mid-1990s and spent money “freshening up,” with a remodeled front office.

Willis Allen has six offices — the headquarters in La Jolla and offices in Rancho Santa Fe, Del Mar, Coronado, downtown and Point Loma. There are 200 salespeople and about 30 more assistants and staff.

Nelson said he’s a strong believer in purchasing real estate, which he did in the 1970s and '80s and held onto it.

“I think that’s an opportunity for young people to build up some wealth for themselves,” Nelson said.

Increasing prices shouldn’t scare off buyers, he said, because of San Diego’s inability to develop any further. The area has the ocean to the west, Camp Pendleton to the north, Mexico to the south and mountains and desert to the east.

“Our supply is limited and demand is going to continue to increase,” Nelson said.

“In essence, the speedier sale time is going to occur in all marketplaces in the lower 25 percent of market value, whatever that is,” Nelson said.

In properties priced up to $1 million, there are multiple buyers competing for the same house because the price is attractive and it’s a bit lower than it was seven or eight years ago. Low interest rates also attract buyers who are comparing the cost to buy versus the cost to rent. Nelson has seen properties priced below $1 million bring in five to 10 offers at the same time.

Nelson estimated that more than one-third of buyers are buying a second home, maybe even a third or fourth home.

Properties priced between $1 million and $2 million have also shown strength, Nelson said. Properties above $2 million are where the market starts to slow down.

“You have to figure that under $2 million, people are purchasing based on the [phrase], ‘a need for shelter,’” Nelson said. “Above $2 million, and basically and truly above $3 million, these are the people who already own a house. They aren’t out there searching for something because they’re afraid to get rained on and need to get into something … They’re buying something because of some emotional need, some personal desire. And maybe they’ve made more money and they want to move up the ladder at a time when they think the market is going to be near the bottom.”

Because the $3 million-plus market is a market of choice and not necessity, Nelson expects it to be a while before it comes back, as people remain cautious.

There aren’t many properties on the market in the $3 million-plus range in La Jolla and Del Mar, but there are more in Rancho Santa Fe, allowing the buyer to “be more in charge of their own destiny,” Nelson said.

“Whereas here, if there’s only one good product and five people interested, then this is what you’ve got to pay if you want it,” he added.

Nelson said he expects prices to see modest growth. Increasing interest rates could cause the rate of appreciation to flatten.

“If there’s fear about the future, our market is not going to grow. So we’ve got to get through that fear, and I see it starting to change,” Nelson said. “I think part of it is, people are tired of what’s happened for the last six or seven years. I think it’s reached a point where people are saying, ‘Why do I need to wait? I need to get going.’”

Nelson entered the real estate world after attending college and then flying in the Navy for five years. He lived in Mammoth Lakes, where he built a round house for himself, using his high school geometry book as a guide. He and a friend, a pilot, built the house together around an old ski tower — they built everything but the heating system.

“We got our high school geometry book and we had to go through the calculations for how to place these because the post was on the ground. And we had to weld it all on below, and then we used a crane to set it up in the middle. And then we hoped all the beams lined up in the appropriate spot,” Nelson said. “And we learned by mistakes.”

Explaining mistakes is one thing Nelson asks prospective employees during the interview process — because everyone has failures, and how they react to those failures “makes you a better person,” Nelson said.