By TONY LOVITT, Special to The Daily Transcript
Wednesday, June 26, 2013

Not many teenagers get a real estate license while they're in high school, but not many high school students share the passion for real estate that Steve Rosetta did...and does.

“My father was a farmer and got into land development when the tax laws changed in the late-'80s and that really got me interested in real estate, seeing how you could create additional value through entitlements and land development,” said Rosetta, a native San Diegan who opened the San Diego office of Cushman & Wakefield in 1996 and is now Vice Chairman and Market Leader for the firm in San Diego County.

“I didn't do much with (his real estate license). When I was in college, I bought and sold a couple of properties, with mixed results. But I learned a lot,” said Rosetta, who earned a master's degree in real estate development at USC and joined Cushman & Wakefield (in downtown L.A.) right out of graduate school. “I've always been focused on the industry.”

Rosetta's focus has been unwavering and, asked for his take on the current state of San Diego's commercial real estate industry, he expressed many positives.

“We're seeing net absorption by some of the larger employers in San Diego, companies like Qualcomm and Illumina. Other large companies are adding net new jobs to San Diego, which is good,” he said. “The volume of activity with smaller companies has also increased.”

And, whether it's multifamily residential, office, retail, industrial or other types of commercial real estate, Cushman & Wakefield is in every product type “in a very large way,” Rosetta said.

“From a leasing standpoint, we're seeing a very good amount of volume in office and industrial, and retail is certainly stable and steady. All of the product types have a much higher velocity of transactions than they did over the past few years,” said Rosetta. “I would say multifamily is far and away number one (as the best-performing product type at present).”

In terms of local sub-markets, Rosetta cited central San Diego as “probably the most active right now,” but said that the industrial properties along the border in South County continue to struggle due to oversupply. Rosetta acknowledged a definite resurgence in commercial real estate in downtown San Diego, but said “there's still a lot more space than there are tenants downtown.”

“I think we're going to kind of bounce around at this level. I think investment sales are going to be driven largely by increased fundamentals and rising rents. Owners are trying to push rents and have a little bit. However, we don't see the overall net new job growth that is going to really create the stable fundamentals for continued growth and until we see that, I don't see us coming into a market with rising rental rates,” Rosetta said. “Rental rates are obviously at all-time lows and I expect they're going to stay at historic lows for the next few years. So, until rental rates increase and the sales prices increase, I don't see owners that don't have to sell, either wanting to sell or choosing to sell.” 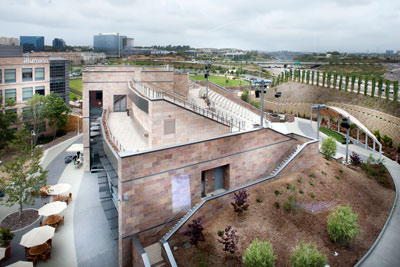 In 2012, Stephen Rosetta negotiated one of the largest transactions in San Diego County history: a lease for Illumina’s new 500,000-square-foot headquarters (above). Courtesy photo

On the plus side, Rosetta said that a couple of San Diego's typically strong sectors, high-tech and biotech, continue to grow and create new jobs. He's also encouraged by what he termed “a good level of new start-up companies.”

“But, I don't see a lot of companies choosing to locate in San Diego unless they're tied to one of the larger employers and have a reason to be here,” said Rosetta. “Most businesses are choosing to look at growth in other markets that have lower taxes, lower barriers of entry and are more progressive as far as growth and the cost of living.

“That being said, San Diego is one of the most wonderful places in the country to live. People that live here, with very few exceptions, don't want to leave. Even when companies are sold, they choose to stay, which is historically what creates the new innovation and drives the economy.”

Lovitt is a freelance writer based in San Diego.