By TONY LOVITT, SPECIAL TO THE DAILY TRANSCRIPT
Wednesday, July 3, 2013

Were it not for an especially daunting chemistry class at the University of California, Santa Barbara in 2001, Chris Robinson might today be an oceanographer or a marine biologist.

Instead, he's made a science of the business of buying and selling apartment buildings in San Diego County, and his company, ACRE Investment Real Estate Services, is doing a whale of a business.

“My father was a broker in the '70s and owns a fair amount of apartments in San Diego. Subconsciously, that may have impacted me a little bit to go that direction,” Robinson said. “But I never said, 'I want to be an apartment specialist.'”

And yet, that's exactly what he's become.

Robinson said he knew that he wanted to go into commercial real estate after graduating from UCSB in 2001, but didn't know which sector would be most appealing.

“Multifamily ended up being the needed position at Marcus & Millichap in 2002, so that's how it started,” Robinson said. “I kind of stumbled into it.”

While a broker at Marcus & Millichap, Robinson met future partners Bill Anderson and Craig Stewart. Over time, each of the men mused separately about the possibility of venturing out on his own. 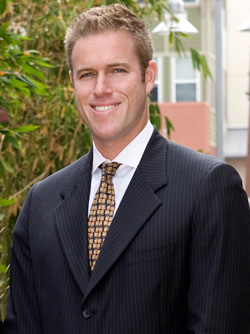 “There was a lot of thought that went into it. But, we didn't know that we were going to work together and build the company together,” Robinson said.

“That was more of a 'light bulb moment,' when we all said, 'Hey, we're thinking the same thing separately. Why don't we come together and do just one thing and make it better through synergy.'”

And so, in late 2009, Robinson, Anderson and Stewart left Marcus & Millichap to found ACRE, focusing solely on apartment buildings and some property management. No office. No retail. No industrial. Just apartments.

“It took a lot of work, but our timing was excellent. In 2009, everybody was saying, 'This is the scariest time and you guys are silly for trying to go out and start a business in 2010,'” said Robinson.

“But I thought, 'You know, this could be a good opportunity to kind of start from the bottom up.' That was in 2010, and that was a huge year for us, the first year.”

Robinson runs ACRE's office in Mission Valley (Anderson and Stewart are in ACRE's Encinitas office) and is primarily responsible for multifamily properties in central San Diego, the South Bay and East County.

Robinson said central San Diego is an especially hot sub-market, because of its convenient location and gentrification. Meanwhile, there are many lower-income people in parts of the South Bay and East County who are unable to afford a home, creating a steady supply of renters.

The strength of the market lies in the fundamentals of operating an apartment building right now, Robinson said.

“Low vacancy, rent growth, expenses that have stayed fairly stable. We haven't seen too much change. So from an operational standpoint, it's a pretty predictable investment to own.

“From a brokerage standpoint, controlling inventory and getting listings is almost a certain way to make money as a broker because there's so much demand just to get a piece of apartments in San Diego,” he said. 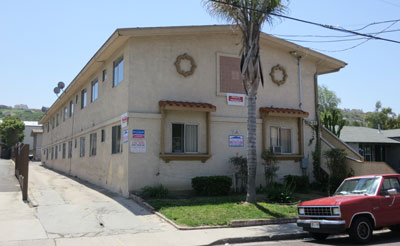 Clearly, multifamily residential is the commercial real estate product most in demand in San Diego County. But, what lies ahead for the market?

“I think we're going to see higher interest rates and we're also going to see continued rent growth. Those two factors may offset each other a little bit, so I see a market that would be slightly more expensive than today, but not a whole lot,” Robinson said.

“And I actually have maybe a little bit of a concern that things have ramped up, price-wise, fairly quickly. Long-term, things are going to continue growing. I just don't know how much in the next year.”

The would-be oceanographer described his job as the science of safeguarding the interests of his clients, ensuring that they maximize value, protecting them as sellers or buyers and making sure they make well-informed decisions.

“It's like a surgeon performing a surgery over and over and over. It gets to the point that they could almost do it with their eyes closed,” Robinson said. “All we do is apartment sales and we know it like a science.”


Lovitt is a freelance writer based in San Diego.
User Response
0 UserComments