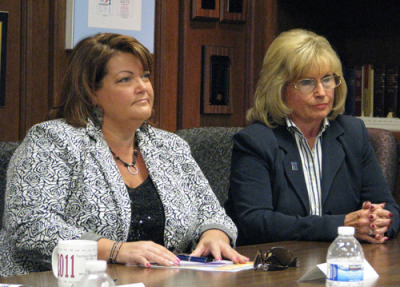 Land sales in San Diego’s unincorporated areas indicate a healthy market, while a paradigm shift is causing high-end La Jolla homes to sit on the market.

A group of real estate professionals discussed trends in different areas of San Diego at a recent roundtable discussion hosted by The Daily Transcript.

Chris Anderson, vice president of the Greater San Diego Association of Realtors, said she has seen an influx of land sales in San Diego’s unincorporated areas.

“That shows a really healthy swing for us,” Anderson said.

As long as the property is priced right it will sell, according to Leslie Kilpatrick, SDAR’s 2013 president elect, who covers Coronado and downtown.

But mother and daughter team Maxine and Marti Gellens of Berkshire Hathaway HomeServices California Properties said houses not near the ocean in La Jolla priced at more than $5 million are having trouble moving.

There were seven sales in La Jolla at more than $5 million each last year, between January and November, and there were another seven sales from November through the end of the year, Marti Gellens said.

“We’re kind of seeing a repeat of that again,” Marti Gellens said.

There have been 10 sales of more than $5 million each for the year to date in La Jolla, and there are five others in escrow, Marti Gellens said. She expects there to be more before the end of the year, in addition to sales that don’t hit the MLS.

There are about 45 listings priced at more than $5 million each, she said.

The oceanfront sales can’t be compared with the regular market, Marti Gellens said, because the ocean will always sell.

“It’s hard to get showings and there are very few sales,” Marti Gellens said.

Only one of the five properties in escrow is off the ocean and it’s in the Shores, which Maxine Gellens said is “very hot” right now.

“There’s a paradigm shift of people not needing, wanting, having to have the big, which is why our $4 (million) to $8 million market, the housing on the hill, is sitting there,” Marti Gellens said.

Maxine Gellens said she thought the La Jolla market was entering another recession in the first half of July and in August, but September picked up.

“We had three sales that were our listings that were on the market for nine months without an offer, and we had double offers on two of the three sales,” Maxine Gellens said. “That market between $2.5 million and $4 million has gotten, I wouldn’t say strong, but it’s very good. The old inventory as well as the new is selling.”

Kilpatrick is seeing a similar trend in Coronado, where homes in the $3 million to $4 million range are selling all over the island -- in the center and on the edges, and she said the “Cays are back” and have had some nice sales.

Kilpatrick said the downtown market is healthy, with recent caravans having 20 properties, many in the $400,000 to $500,000 range. Donna Sanfilippo, broker and owner at Weichert Realtor Elite, said the investors have been fixing up downtown units and holding onto them, waiting for the peak of the market to turn them over.

“The good thing about seeing inventory and maybe a little pullback on the investor cash buyer [is that] maybe that new client can buy up or buy down. For a while, people were trapped in their property, and I think that is changing,” Kilpatrick said.

The professionals agreed that price appreciation will continue through 2014, but at a slower rate, back in the single digits. Kilpatrick said this is positive because “we have to move toward stabilization.”

People may look for equity lines of credit as prices increase, Lea said, and Kilpatrick added that “we want people to have equity in their homes; we want people to see that equity as something they should leave alone and continue to pay down the mortgage, so when they get to a certain point in their lives, they have a tangible asset with no debt on it.”

Incomes haven’t kept up and as a consequence, people look at their assets for money, Lea said, adding that 70 percent of the economy is the consumer.

“Now we have a situation where people don’t have equity, they’re not spending. That’s one of the big reasons we’re not seeing job growth and a robust recovery,” Lea said. “And in the situation we’re in, I think it’s inevitable that as prices come back up, people will look back at that equity. Even though I agree with you -- it’s not the safe and sound thing to do -- it’s the only alternative a lot of people have.”

Maxine Gellens said she hasn’t seen the price appreciation in La Jolla. There haven’t been many houses that she has seen flipped by investors in the area.

Linda Lee, SDAR’s board president, said the housing market will probably finish a bit softer than the first half, but is “quite healthy.”

“You won’t be able to do a loan with Fannie or Freddie that the back-end ratio exceeds 43 percent, regardless of the down payment,” Buehler said.

That means that if the principal, taxes, interest, insurance, long term debts -- anything owed 10 months or more -- or a large credit card balance added up exceeds 43 percent of the gross income, the agencies won’t allow a loan for that person.

Buehler said Wells Fargo has a strong balance statement and needs to do more lending regardless of whether it’s a qualified residential mortgage. Wells Fargo won’t do loans when ratios exceed 43 percent, but it will do a non-QRM strictly with its balance statement, which won’t be eligible for Fannie Mae and Freddie Mac.

“I think what’s going to happen for you who sell real estate in the room and are working with homebuyers -- you’re going to have to be very careful of who is doing you loans and who can have access to do non-qualified residential mortgages,” Buehler said.

Many of the buyers in the Gellens’ market who pay cash won’t have to worry about that change, but other markets may experience a challenge. Lee said the implementation of the act is expected to be delayed and the Realtor associations are fighting for California.

Buehler said Wells Fargo may also be preparing for Fannie Mae and Freddie Mac to lower its loan amounts from about $650,000 in San Diego down to $417,000. Wells Fargo has hired 50 new nonconforming underwriters since January 2013, six of which are located in San Diego County, to have the authority to do loans above Fannie Mae and Freddie Mac loan limits.

Anderson said one of the biggest loans she does in the Ramona-Jamul agricultural land areas is the USDA loan, which is zero down and for a certain qualifier. She said parts of Ramona aren’t designated USDA anymore because it’s more urban than areas that are farther out. Fires also affect that housing market, because companies won’t insure for three months after.