North San Diego-based Welk Resort Group Inc., which already owns 961 constructed timeshare units from here to Branson, Mo., to Cabo San Lucas, plans to more than double its units to at least 2,477 within the next few years.

Jon Fredricks, Welk Resort president and a grandson of company founder and bandleader Lawrence Welk, notes that the home resort property north of Escondido with its two executive-style golf courses, tennis courts, pools, dinner theater and upscale units, has continually been transformed and expanded since 1964.

Fredricks said Welk, who started buying North County property in 1955, was a pioneer in the vacation timeshare business and "we have consistently been delivering four-star amenities for as long as I can remember."

The units at Welk Resort properties vary according to location, but are all fully furnished. Many are divisible or able to be "locked off" to provide separation when necessary. The units each have kitchenettes, stacked washers and dryers, and individual temperature controls. Some of the larger units have fireplaces in both the living room and bedrooms.

The 450-acre Lawrence Welk Village Resort near Fallbrook has 574 units that are about evenly divided between its Resort Villas and Villas on the Green branded timeshares. The timeshares for these complexes are 95 and 93 percent full, respectively, meaning that most of the transactions are resales.

Prices for timeshares can vary depending on the size of the unit, location and dates desired. Fredricks said the initial buy-ins may range from about $11,000 to more than $50,000. Resold timeshares at the North County resort are being advertised from as little as $3,000 to about $27,000 on sellmytimersharenow.com, but restrictions may apply.

While Resort Villas and Villas on the Green are built out at Lawrence Welk Village, there are plans for a 118-unit development called Canyon Villas that is in the works. Welk Resort typically acts as its own general contractor.

The company's most ambitious plan may be what it proposing at its Branson, Mo., locale. Although the timeshare developer has only developed 159 units (or 56 divisible suites) 670 units are planned. 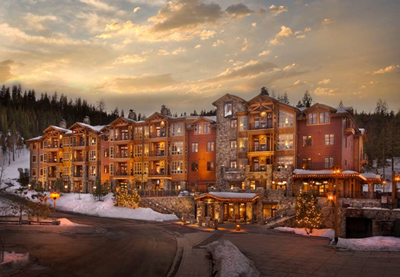 Welk Resort has acquired 21 units at Northstar Lodge at Lake Tahoe, where it plans to build 83 more for a total of 104.

In Lake Tahoe, where Welk Resort has acquired 21 units at Northstar Lodge, it plans to build 83 more for a total of 104.

"We have our own gondolas at the base of Northstar Mountain," Fredricks said.

Fredricks said the Northstar project was originally conceived as a "Hyatt fractional project" until the original lender foreclosed on the property during the recession.

In 2009, Welk Resort built and opened Sirena del Mar (Siren of the Sea), which is perched on the cliffs of Cabo San Lucas at the southern tip of Baja California. The seven-acre property overlooks the Sea of Cortez.

Welk Resort is boosting its unit count from 68 to 108 at Sirena and planning 144 more, for a total of 222. In 2013, Expedia announced its Insiders' Select Awards and ranked Sirena Del Mar seventh out of 150,000 hotels and resorts worldwide.

Welk Resort also announced this year that it had bought 6.5 acres on the Blue River in Breckenridge, Colo., with plans to build 123 luxury units by 2015.

The company also has acquired 21.45 acres in Poipu Beach, Kauai, with plans to build 164 units by 2018. The Hawaii property is tentatively called Welk Hawaii Royal Palms.

Today, the Welk Resort Group has grown to some 43,000 fractionalized owners. The company typically makes 10- to 15-year loans to aid with the acquisitions.

Earlier this month Welk Resort announced it had closed a $158.67 million securitization backed by notes receivable from vacation ownership interests. This securitization allowed Welk both to refinance existing debt and provide more than $14 million to help expand existing properties and begin constructing new ones.

Fredricks said Welk Resort owners may not only trade points at existing and future resorts, but at properties around the world that have reciprocal arrangements.

When asked where Welk Resort might go next, Fredricks said coastal California is always a possibility, provided he could get the project or projects through the California Coastal Commission.

"We might go to Napa Valley at some point," Fredricks said. "Or maybe an urban property in the city of San Francisco."

The family-owned company (Welk's son Larry is the Los Angeles-based CEO) will celebrate its 50th anniversary in the resort hospitality business in 2014.