Few options for home sellers looking to downsize in SD

Few options for home sellers looking to downsize in SD 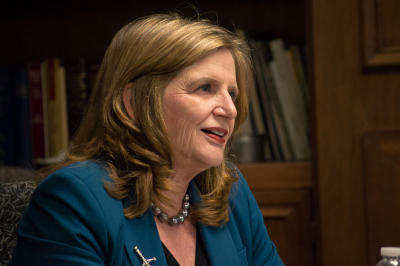 San Diego is about to experience increasing demand in homeowners looking to downsize in a market with few single-story options, local real estate professionals say.

They discussed this pent-up demand at a recent roundtable discussion hosted by The Daily Transcript and sponsored by the Greater San Diego Association of Realtors.

Those looking to downsize will also be competing with first-time homebuyers, who typically seek similar houses to buy.

“Everybody is starting to see in their lives changes that make you wonder, ‘What will we do? Will we go to a smaller home?’ And the desire is for one-story, single-family homes more so than condos. … And that’s the same competition for the starter young family,” said Leslie Kilpatrick, 2014 board president of the Greater San Diego Association of Realtors.

Trisha Daly, a Realtor with Re/Max Associates, said single-story homes are hard to find because the trend in the 1980s and ’90s was for developers to build two-story homes.

Jeffrey Douglass, branch manager at Pacific Sotheby’s International Realty, said some people are downsizing by moving downtown and into buildings that have elevators.

All infill projects are going vertical, said Ashley Lunn, team leader at Keller Williams San Diego Metro. She cited a project under construction in North Park that has 70 steps from the street to the first unit.

Developers should consider making their projects more senior-citizen friendly, Lunn said, or they’ll have a hard time selling something that isn’t accessible to everyone.

Pent-up seller demand is also coming from those who got out from underwater due to price increases, and Kilpatrick said she expects inventory to come back on the market.

The best time to put a house on the market is between now and May, “before the market gets flooded with a lot of inventory,” Daly said.

But Peter Martin, a Realtor at Pemberley Realty, said sellers won’t enter the market until they’re satisfied that they’ll get an acceptable offer.

While Kilpatrick and others agreed that the market has seemed busy, Lunn said the numbers for January don’t reflect that frenzy. For the past decade or so, January has averaged about 2,500 homes sold, and as of Jan. 30, there were only 1,550, she said.

“It’s off -- extremely,” Lunn said. “What I think is happening is we’re going to make it up immediately -- in February and March. All of this activity that isn’t going on is going to pop.”

Lunn said she also expects to see an immediate pop in prices, which will trail off as inventory approaches 10,000. To have a balanced market, there would need to be closer to 15,000 units, she said.

Leo Sullivan, principal of Sullivan Lawyers, agreed that there will be a pop in prices, and he expects a long-term downward trend afterward.

“I don’t think we have the employment base anymore to support the current prices, number one, and number two, we’re having this outward immigration of people,” Sullivan said.

With more than 24 months of month-over-month increases in prices, Lunn said, she’s nervous about a dip.

“You can’t sustain month-over-month increases at the rate we have forever,” Lunn said. “Typically, once we appreciate 25 percent, we go down a little bit, and we’re close to that number.”

Cory Shepard, general manager of Coldwell Banker West, said the typical recovery to a recession is about five to seven years.

The housing market bottomed about February 2009, but Sullivan said he doesn’t expect history to repeat itself.

“I think we’re about five to seven years away from another recession because even though statistically the recession bottomed out four to five years ago, in reality, it didn’t,” Sullivan said.

Douglass said he expects interest rates to increase in the long term, which is creating some urgency now as buyers realize that the bottom was a while back and an increase is in the future.

Judy Bramer, a Realtor at Re/Max Associates, said she, too, has seen buyers rushing to avoid higher interest rates.

Shepard said he expects an upward pressure on interest rates this quarter as the Federal Reserve pulls back on its bond-buying program, and that he wouldn’t be surprised if there is a 1-point increase in interest rates to 5.5 percent by the end of the year.

Kilpatrick said buyers and sellers get caught up in trying to time the market when they should act on their own personal circumstances.

“When we had that big run-up last year and that burst of excitement -- those conditions had existed for months. Months. And then suddenly, a few people started acting and it picked up steam,” Kilpatrick said. “I think the best job we can do is educating people who are sellers on how to sell in the market they’re in and when you should buy is when you can.”

Buying a house is a life investment, she said, and while people are constantly analyzing when the market can go up or down, “at the end of the day, if you can’t buy because you don’t have a job, it’s immaterial to you.”

Real estate agents have taken on the role as a counselor for their clients, and are no longer typical sales people.

“When I was in business 20 years ago, it was much more sales, and now it’s much more of a service and the agents that are [successful] now, or in the future, are those who can take this vast amount of raw data that’s out there and walk people through and decide what’s relevant and what’s not,” Douglass said.

Consumers have access to a lot of information through the Internet, and Realtors often have to guide their clients away from some sites, said Alex Rojas, broker/owner at Shore Point Real Estate.

Real estate transactions occur around transitions in people’s lives much of the time, she said. Sometimes those transitions are positive, such as marriages or births, and other times they are about divorce or job loss.

“Love and loss, that’s what we’re dealing with,” Kilpatrick said. “We’re dealing with people who are going to do major financial transactions during stressful times, and one of the most important things a good Realtor can be is a good counselor, a clear head, somebody guiding you through what you can and cannot reasonably do in your situation and achieve the outcome you’re looking for.”

Kilpatrick said that’s why she is resistant toward statistics: They don’t matter if it’s not the right time in someone’s life to buy or sell.

Daly said she also goes on many “counseling interviews” with Bramer to lay out options for her clients and decide what’s best for them.

Daly said she advises her young clients to be aware of a home’s potential resale or rental value, just in case.

“I know I’m talking myself out of business, but I always tell people, ‘Let’s try to get you something that when you outgrow it or get transferred or life changes, let’s see what the rental market would be -- if it would cover the mortgage and HOA fee, if there is one. That way, when you move, you’ve started your retirement,’” Daly said.

She also often reminds her clients to breathe when everything seems to be moving so fast.

“Stop the madness,” Daly said, “just for a second.”