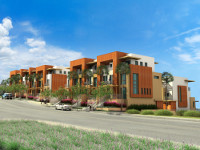 A rendering shows new row houses that recently broke ground in Golden Hill. Funded by group investing, the $24 million project will have a model unit ready for viewing by October. The single-family units look as though they’re connected, but are separated by about 5 inches and have no common walls. Image courtesy of Bam Communications

Thirty-three environmentally sensitive row homes are making their way to Golden Hill as the result of a group investment executed by LIV Capital Group.

The estimated $24 million project will have a model unit ready for viewing by October, according to Richard Montaño, CEO of LIV Capital Group.

The units will be sold as single-family homes. They look as though they’re connected, but are separated by about 5 inches and have no common walls.

Two partners owned the original Golden Hill property, which consisted of three single-family homes that were demolished in November.

One partner sold his 72 percent share to Montaño, who then structured a real estate investment by making a limited partnership and creating ownership opportunities.

LIV Capital Group was formed in 2009 when Montaño and his wife turned a hobby into a business, and they now have a client database of about 1,000 people. The company allows others to invest as little as $10,000 in San Diego’s real estate.

“The idea of the company was really to provide real estate opportunities for people who weren’t capable of doing larger projects on their own,” Montaño said.

Montaño interviews nonaccredited investors to ensure they are educated and doing the right thing for their situation.

“This is at risk -- real estate investments are at risk. In real estate, we’ve seen ups and downs. Although I don’t anticipate any downs in the near future, we design all of our investments to mitigate the downside risk,” Montaño said.

After knocking on wood, Montaño admitted that his investors have yet to experience a loss.

“The benefit of working with us is that you can reduce your risk by sharing the risk with other like-minded investors,” Montaño said. “An [individual] investor will typically go in and buy a building by him- or herself. They would take on all of the risk -- and even though there’s a bigger benefit for them, they would take on all of the risk. If you co-invest with 15 investors to take on that same amount of risk, it reduces the risk for each individual investor if something went wrong.”

LIV Capital Group has done investments in the form of loans, flipping a house, owning an apartment building and owning a rental property.

“Right now, there are great opportunities to build homes. In the past few years, there’s been a tremendous lack of inventory,” Montaño said. “The idea behind our current building projects is to create inventory because the demand exists and exceeds the current supply.”

He created a passive income and started to plan for retirement.

As he continued to make real estate investments, he found that his family and friends were coming to him for advice. That’s when he and his wife, a broker, formed the business and included individuals outside their immediate network.

When the company first started in 2009, Montaño said, banks were starting to issue home loans again, which signaled to him to start buying properties -- mainly foreclosures -- to flip and sell.

In 2009 and 2010, his company was strong in terms of volume, which started to dissipate as the competition increased and fewer foreclosures came on the market.

Real Estate Group investing is governed by the Securities and Exchange Commission (SEC) and LIV's investments typically fall under SEC Regulation D. Crowdfunding is another method of Group Investing but falls under the Jobs Act, which has different limitations and has proved to be unsuitable for Montaño’s projects, he said. His company is similar to a REIT, but focuses on individual projects. The individual projects vary in structure based on how it was acquired and the intent of the asset.

Investors can expect to see a return similar to if they had made the investment on their own, Montaño said. If a property were purchased with the expectation for a 5 percent return on the cash, Montaño said he would buy that property in a way that the group investors would receive that same return, or better. If he leverages that property, he can increase the return.

His company tries to acquire apartment properties with a minimum of 10 percent annual rate of return, and home flips typically have a 10 percent rate of return but in a shorter time frame, he said.

Each investment his company has offered has been a profit share, and Montaño personally invests in each project. There’s typically a developer fee paid to one of his staff members or someone affiliated with his company and transactional costs including a broker fee. He doesn't charge an annual maintenance fee.

“I co-invest in all of our projects with my own personal funds, because they are all projects I would be willing to do alone. My co-investment shows I am committed to each investment we offer our clients, and as manager, I participate in the profit as my fee,” Montaño said.