By GLENN GRANT, Special to The Daily Transcript
Monday, July 7, 2014

As one of the few real estate professionals specializing in sales at Coronado Shores oceanfront condominiums, Joe Economou is at the top of his game.

"Essentially, my whole professional career has been spent at those 10 buildings," said Economou, owner/broker of Beach House Realty in Coronado.

"All I personally do now is The Shores. It's a daunting project. Just to walk in there is disorienting. I was lucky to cut my teeth there early and know my way around."

Being familiar with the property is a definite plus.

Prices range from the $600,000s for a studio to the $4 millions for a three-bedroom plus den, three-and-a-half bath, 3,000-square-foot oceanfront unit, he said.

"Typically, we see the highest per-square-foot values of any condos sold in the county at The Shores," he said. "That's what the oceanfront does for you."

Sales at The Shores accounted for about half of Beach House Realty's $30 million in sales last year. While 25 of the transactions were at The Shores, another 37 were within Coronado "village" limits.

Economou said the firm is on the same pace or better for 2014. His 10 licensed agents mostly concentrate on sales in Coronado, with some making inroads at The Shores.

Raised in San Diego, Economou has always known his way around Coronado. His father was a naval aviator at Naval Air Station North Island, retiring as executive officer in 1969.

After starting as a doorman at The Shores, Economou worked his way up to a property management position.

"I was trying to get my feet wet professionally," he said. "I set my sights on selling The Shores. I had a very informal business plan. I was going to manage a building there and then I was going to go into sales for Dick Maitland, the founding broker at Coronado Shores for Jerry Snyder, the developer.

"I worked for Dick from June 1990 until the early 2000s, when he passed," he said. "I had made overtures to him for many years to be a principal in that company, but upon his passing it just didn't work out. So I started Beach House."

The Shores attract a prosperous niche buyer, and Economou has come to know them well. One of his good friends was popcorn king Orville Redenbacher, who lived at The Shores from about 1990 until he died there in 1995.

"It's a very affluent, Orville Redenbacher-type crowd down there," Economou said. "And I would put 'Reddy' in the mid-level of assets. We think we have about 20 billionaires and everybody else has to figure out how to get by on millions.

"Probably at least 50 percent of our buyers are cash buyers and the rest could be but opt for loans because rates are so favorable right now," he said. "I've never lost a sale at The Shores because somebody couldn't qualify for a loan. It's an affluent crowd in the village, too. Especially the new owners. To buy here now, you have to have wealth."

Even high-end buyers like open houses, and Economou conducts them regularly. "I've met a lot of good buyers through open houses," he said.

"Last month, I closed a $2.6 million all-cash transaction from a buyer I met at an open house a couple of years ago. So open houses pay off. At 60 years old, I'm still excited about doing them." 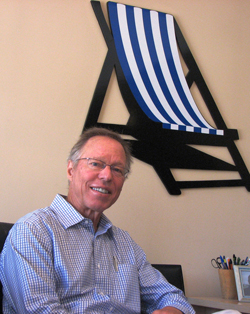