By GLENN GRANT, Special to The Daily Transcript
Wednesday, July 16, 2014

Tom Money knows a thing or two about Chula Vista's history. His real estate office is a part of it.

Money Realty has been in the same building his parents built on Third Avenue since they started the business in 1944. It is the oldest continuously operating real estate company in Chula Vista, and the native son has been involved in it since his mother retired in 1970.

Formerly a sailing crewman in the South Pacific, he started by taking out the trash and putting up for-sale signs, then worked his way up to leasing properties and developing clients.

Money still has a passion for sailing, and the business that has enabled him to pursue it. At age 70, he has no plans to call it quits on land or sea.

"When you own real estate, you never really retire," he said. "Ours is an easy business to get into, but people find over the long run they don't want someone who's going to be here today and gone tomorrow.

"The fact that we've been here since 1944 seems to help people believe we're going to be around awhile longer."

The firm has weathered South Bay's ups and downs, and Money has adjusted with the times. He was involved in developing about a half-dozen buildings along Third Avenue in the downtown core.

"Commercial seems to be coming back," he said. "We've got a couple of developable lots in escrow that have been on the market for two years. We're doing some leasing on some nicer buildings. A lot of it has to do with just being around when someone is looking for someone to help them.

"At one time we had 10 salespeople and took over half of the building downstairs. But I found most of my income came from my own deals and most of my joy came from helping people with real estate rather than managing people. So I have a property manager and secretary now."

While residential sales were "lackluster" in 2013, Money's property management services had a record year, he said. Association management work has also become part of the mix. He also does consulting for many attorneys, accountants and their clients.

"They know if they want a drive-by or some information, I'll get that for them at no cost, but if they want an opinion of value, it'll write it up and charge them for my time," he explained.

"A lot of times over the years, that's been like planting seeds in a garden. Someone will call and say, 'Remember that place on Evergreen you looked at five years ago when we put that into a trust? Well now, Dad's died,' and they want to do something with it. So most of our business comes from referrals like that."

After more than four decades in real estate, what keeps Money motivated?

"I still get a tremendous thrill from getting a young couple into their first investment, or finding a tenant for a property that's been mismanaged," he said.

"I enjoy helping people solve their problems. I used to think after going to a lot of real estate classes that it would be like being a banker -- you go to work every day and then come home. But I learned that you never learn everything about real estate. It's changing, it's dynamic. You never get bored." 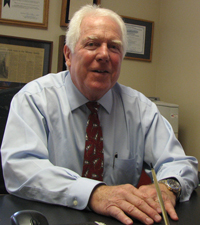