Construction recently began on a Walmart Neighborhood Market in San Diego — the first of the company’s smaller-sized version of its stores to open in the county.

The first Walmart Neighborhood Market opened in 1998 and there are now 167 of them across the country. They are similar to traditional grocery stores and are one-quarter the size of Wal-Mart’s larger store.

The San Diego store, located in the former Farmers Market building between 21st and 22nd streets, will be a 45,800-square-foot facility selling food and everyday items such as health and beauty products, stationery, paper goods and pet supplies. The store also will have a pharmacy, deli and bakery. 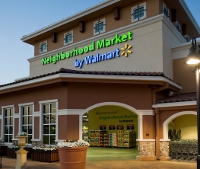 Logan Heights will be getting a scaled-down version of a Walmart store, what the company calls a “neighborhood market,” which will mainly sell groceries and everyday items.Photo courtesy of Wal-Mart

“We think our store can be part of the solution for local residents who want more affordable grocery options close to where they live or work,” said Steven Restivo, senior director of community affairs for Wal-Mart. “Plus, we have the opportunity to revitalize a vacant property while still preserving the historic character of the building, which is right in line with our sustainability goals for the company.”

The store will employ approximately 65 people.

Restivo said the company’s goals with the neighborhood markets are to “offer a quick and convenient shopping experience for customers who need groceries and pharmaceuticals all at affordable prices.”

There has been some resistance to allow Walmart Supercenters within the city of San Diego. Supercenters average 185,000 square feet and combine a full grocery and general merchandise under one roof. Restivo said while it’s the corporation’s preference to open large stores, Wal-Mart has “become more flexible in our approach to help ensure that our stores are the appropriate size for a community, are a reflection of the surrounding area, and serve a real local need.”

San Diego City Councilman David Alvarez, whose district the new Walmart will be in, did not return calls on this matter.

Restivo said the Wal-Mart does not disclose the cost to open a Walmart Neighborhood Market compared to a standard-sized Walmart.

The San Diego location is expected to open in fall 2012. Wal-Mart hired Steve Julius Construction Inc. to head construction of the project.

In February, Wal-Mart broke ground on a 75,000-square-foot storefront in the South Bay, off Interstate 5 and Palm Avenue. This would be the fifth Wal-Mart in the region and the 20th in the county.