Market for these centers increases as work force changes

When Kim Richards began her public relations consultancy, KDR PR, in March last year, she worked from home every day. But she missed being around people and the support network, having worked in an office until she struck out on her own.

When a contact mentioned she was launching a co-working space in Sorrento Valley, Richards immediately took advantage of the opportunity to be able to go into a fully-equipped office occasionally, as opposed to working at Starbucks when she was tired of the isolation of her home office.

"It's the best of both worlds, since you get the camaraderie with the flexibility to be on your own when you want it," Richards said.

Co-working spaces that have cropped up around town represent a new trend in commercial real estate, the result of demand from small businesses that want to downsize from a separate office space and solo entrepreneurs who want a collegial work atmosphere on occasion. 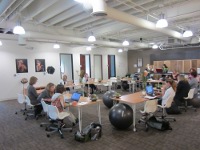 It's also affordable enough for those who work at home to present a professional image when meeting clients, instead of arranging to meet them at a coffee shop.

From private practice attorneys to chartered accountants, psychotherapists and independent consultants, the professionals who flock to shared office spaces are a diverse lot.

Some are solo-practitioners, others have a couple of employees. A few rent the space full-time, while most pay for part-time use which varies from a couple hours to a few days each week.

Richards goes into Hera Hub, the Sorrento Valley co-working space that is exclusively for women entrepreneurs, for a few hours each week.

"It’s important for me to have access to a community like Hera Hub where I can focus, network and collaborate with like-minded entrepreneurial women," Richards said.

Felena Hanson, the founder of Hera Hub, was a marketing consultant who found it hard to focus some days while working from home. She also heard from other professional women who had similar challenges.

"They were looking for an opportunity to bounce ideas off other business owners, but wanted to also be by themselves sometimes — what I call ‘working alone together,’" Hanson said.

This inspired her to launch the community, as she refers to Hera Hub, last August, financing it with a big portion of her life savings. Hera refers to the Greek goddess of women, a colorful character.

There are four office spaces occupied by full-time clients and a library-style open working space with tables, a conference room and smaller meeting room that occupy 4,800 square feet on the first floor of a three-story office building, close to the freeway and dining.

Hanson has created an inviting spa-like atmosphere with free access to Wi-Fi, video conferencing, printing and coffee for subscribing members.

She focused on women, since she thought their tendency to work collaboratively and foster each other warranted having their own work space.

Hera Hub has acquired about 130 clients like Richards, who come in a couple times a week. She estimates she can cater to 200 clients at full-capacity.

For $269 a month, you get 40 hours with two hours in the meeting room and use of the address for mail and deliveries. At the high end, $369 a month gets you access for 80 hours a month and five hours of meeting space in addition to using the address. The timing has to be within regular business hours.

Hanson also rents additional meeting space by the hour, at nominal rates of $15 for the meeting room, $30 for the conference room and $100 for larger events. Non-members can access these rooms for the occasional meeting at slightly higher rates.

To engage her clients, she organizes networking events for members to leverage each other's contacts and advice. Subject matter experts in accounting or taxes and other core areas are selected as gurus, and they offer lunch-time seminars on the basics to fellow members.

On the day she spoke with The Daily Transcript, Hanson had just come from a get-together to toast the recent success of one of the women she had in her business.

Energized by the response, Hanson is actively scouting locations in Mission Valley and Carlsbad, since women entrepreneurs in North County and South Bay find Sorrento Valley to be a bit of a commute.

She has plans to scale up the business and launch nationwide next year, with the idea of franchising it.

Hanson wears many hats, from mentor to cheerleader for her clients.

"I think of Hera Hub as a platform for them to launch and grow their business. I have the best job on the face of the Earth. I make new connections every day," Hanson said.

On the other end of the spectrum from Hanson's venture is Real Office Centers, located in the UTC area in La Jolla, with another opening in downtown San Diego this July.

Launched in Newport Beach last year, it has grown to four centers so far.

The La Jolla location, which opened in January this year and is at 60 percent of capacity, has 18,000 square feet and is on the sixth floor of a high-rise located between Interstates 5 and 805.

It has about 50 offices, with two conference rooms and a casual meeting room, a refreshment bar with endless Starbucks coffee and snacks. The rent includes access to an on-site gym with treadmills, elliptical machines and free weights.

Eric Reissner is the area sales manager for Real Office Centers, and he runs the location with the help of an office manager and two customer service specialists.

Real Office Centers distinguishes itself by paying attention to detail, and offering a wide variety of shared office choices, from bare bones to full-service.

There is the virtual office option for those who need a physical address for deliveries or an answering service. "For an outsider looking in, there's a professional image but they could be working in their garage or home," Reissner said.

Both part-time and full-time options come with a range of add-on services that clients can choose from, such as administrative support or concierge services.

"Our goal is to be an extension of someone's business, take care of all the things in daily office life — coffee, supplies, answer phones, admin work — all you do is bring your laptop. My girls upfront can do cold calling, invoicing, etcetera," Reissner said.

Like the services, the office spaces that Real Office Centers offers also vary widely, in terms of area — going from 140 square feet to 260 square feet, as well as views, interiors and amenities — so Reissner stressed that there's no one set price.

But when pushed to give a ball-park estimate, he said a 150-square-foot space would cost $189 for 16 business hours per month, what the company refers to as ROCstar service, which comes with an answering service.

The same space would rent for $800 for full-time unlimited use, with some access to the conference room each month. His full-time clients have keys to their offices and rent the space for short and long term leases.

"We're trying to take the industry in another direction, by taking care of a lot of behind the scenes things so they can focus on their business. We'll take care of dry cleaning, car wash, airport shuttle or make reservations," Reissner said.

He sits down with potential clients to figure out exactly what they need, since a lot of people often think they need a lot more than they actually do, or they don't realize they need some services they haven't considered.

He sees the market for such co-working spaces getting bigger, as professionals seek more convenience, at lower costs than an individual office.

"The work force is changing. Companies that are hiring are taking people on a contract basis, being cautious. The work force trend points to more and more contract workers," Hanson said, explaining why so many shared work spaces are popping up.

"Things are changing and it's exciting. I like being on the leading edge."