Minimal safety work was under way Thursday afternoon — but nothing more, after Wal-Mart Stores Inc. and a Sherman Heights community watchdog group agreed to stop construction of the new Walmart.

The complaint is filed against the city of San Diego, which issued the permits; Imperial Investors LLC, the developer; and Steve Julius Construction Inc., the general contractor.

San Diego Superior Court Judge Joel Pressman heard a motion for a temporary restraining order to halt demolition at 4 p.m. Wednesday from the coalition, which watches over neighborhoods in southeastern San Diego.

Wal-Mart did not have enough time to read over the claims, so the judge did not issue the restraining order, but rather had all parties come to a verbal agreement on record stating construction and demolition would stop until today, when a full hearing is scheduled at 9 a.m. on whether to allow the project to continue.

A rendering of the Walmart Neighborhood Market.

“Even though we are well within our bounds to move forward, we have voluntarily suspended activities on the site out of respect for the process,” said Steve Restivo, senior director of community affairs for Wal-Mart. “From day one, we've said we want to open stores in San Diego the right way and look forward to a favorable decision on Monday.”

They say the plans only called for remodeling the inside of the old structure and not a full demolition.

“We were in extreme shock when we saw this,” said Georgette Gomez, resident and member of the Coalition for Safe and Healthy Economic Progress.

The San Diego City Development Services and Neighborhood Code Compliance staff visited the site on Wednesday morning to respond to community concerns that demolition was being done without a permit.

The city’s copy of the approved plans was compared with the plans on site, and both were found to be identical. 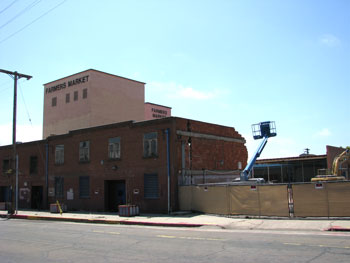 Parts of the old Farmers Market had been torn down before work was stopped on Wednesday. Staff photo: Carlos Rico

“The work performed is in compliance with the stamped, approved plans and well within the scope of the work authorized,” said Lynda Pfeifer, senior public information officer for the Development Services Department. “The demolished section of the exterior wall adjacent to Imperial Avenue was measured and it is within the dimensions as noted on the approved plans.”

The project has been issued a conditional use permit and a site development permit to construct a 45,800-square-foot retail and grocery market storefront (one-third the size of a Super Walmart), with a minimum of 15,000 square feet of “supermarket” use and retention of 106 parking spaces.

The applicant submitted a permit application in August 2011 for seismic retrofit and tenant improvements.

Staff sent out a public notification on Aug. 26, 2011 and received input from the public that the building is potentially historic.

Staff concurred, and required a copy of a previously prepared report that evaluated the building’s history and significant character-defining features.

Based on the information in the report, staff reaffirmed the determination that the building is eligible for designation, and required revisions to the project scope to ensure consistency with the U.S. Secretary of the Interior’s Standards for Rehabilitation.

Staff worked with the applicants on the revisions between August and November 2011.

The final approved scope of work included the following:

* Removal of a portion of the north wall facing Imperial Avenue and a small section of west wall facing 21st Street;

* Construction of a new masonry wall with an entrance at the north elevation;

* Removal of the non-historic windows within the original openings and installation of historically appropriate 3-over-3 windows, consistent with the historic photographs;

* Removal of the non-historic recessed entries, which will be replaced by new, appropriate doors and windows in the original openings;

* Retention of the grain silo and exterior access stair;

* Demolition of the floor and roof, which will be leveled out for access and functionality, and;

* Demolition of one tower.

Based on a rendering, the design of the Walmart Neighborhood Market will have a brick outer finish, similar to the old Farmers Market building.

Walmart officials said some of the bricks will be kept to build the new entrance.

The Walmart Neighborhood Market will sell food and everyday items such as health and beauty products, stationery, paper goods and pet supplies. The store also will have a pharmacy, deli and bakery.

Per company policy, Wal-Mart (NYSE: WMT) did not disclose the cost to construct and open this new storefront. The Sherman Heights area Walmart is slated to open in fall 2012.

The community watchdog group that you speak of are residents of the Sherman/Logan heights community, community groups in the region, and several other groups that are working to make sure that Walmart does not walk over the community and engages in a dialogue and community benefits agreement. Thanks for the article.

Looks like this walmart will really be a good thing for San Diego. I like the way Walmart is keeping the historic look and feel of the building. Good job Walmart