Rick Amison, director of human resources at Pacific Rim Mechanical in San Diego, was the last person at his company to know about his selection as the 2012 Member of the Year by the Associated Builders and Contractors of San Diego.

“They kept it a secret,” Amison said. “I went to the event that day. About halfway through (the introduction) I figured it out. The company was very supportive of me.”

Amison has been actively involved with ABC for 15 years, and Pacific Rim Mechanical has been a member for virtually all of the ABC San Diego Training Trust’s 25-year history. Amison said the award made him realize his efforts over the years have value. “I really haven’t done any of this stuff for any recognition. I really do believe in what ABC does, and giving back to the industry.” 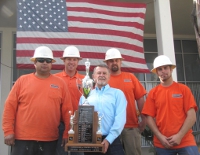 “He is our go-to person,” Yarbrough said. “Regardless of what you need, you can depend on him for support, whether it is traveling to the National Craft Championships to support our apprentice competitors, or showing up to speak on behalf of merit shops at public hearings.”

Amison says the award is a great way for ABC San Diego to recognize the people who support and stand behind ABC. “It’s incredibly important to stick together as a coalition of people who believe in fair and open competition,” Amison said. “It’s important to have someone to guide all the merit shop companies to support the way we do business.”

After spending 15 years as part of a union and working for union contractors, Amison said he is a strong, firm believer in the fair and open merit shop philosophy and he’s willing to back it up.

Amison said Pacific Rim Mechanical counts on ABC’s Apprenticeship Training Trust to provide a high quality work force. “Being an HR director, I believe in training. We’ve looked at the quality and ability of ABC to train. Like our business, we hope people will leave it to the professionals. The quality of ABC training can’t be matched.”

Encouraging other contractors to become members of ABC is one of the ways Amison supports the organization. “It’s necessary to succeed in business in San Diego,” he said. “ABC is there to help you. It’s nice to know I have somewhere to go and I get good professional advice.”

Amison didn’t get to express his full sense of gratitude for the honor of being selected Member of the Year at the event. "I didn’t get to say this when I got the trophy: I really am proud to be able to be part of ABC. It means a lot to me to have a venue to give back to the community with people that care as much as ABC does.”