Karl Heusner (left) and Joshua Kelly battle it out for the plumbing gold at the 2011 Craft Championships. Kelly placed second.

Twenty seasoned apprentices and craft trainees sweated it out under the sun and the watchful eye of judges, and several hundred spectators at the San Diego Associated Builders and Contractors Apprenticeship Craft Champions Competition held at the ABC Training Trust Academy.

Competitors in electrical, plumbing and sheet metal crafts demonstrated their skills to win the right to represent San Diego later this month in the 2012 ABC National Craft Championships in San Antonio.

Sevilla said he was nervous at first. “Once I got started, it was just like being at work.” He gives credit to his employer for helping him prepare and supporting him through the competition. A big contingent from Bergelectric was on hand to celebrate Sevilla’s win. 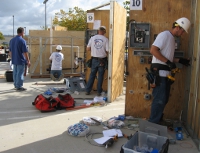 Electrical apprentice Wesley Thompson (right) of Laser Electric is hard at work during the competition. Thompson placed third in his craft category.

Fields had a large cheering section on hand including his wife, parents, in-laws and extended family who all let out a huge cheer when he was named the winner.

The sheet metal champion is Jason McElveny of West Coast Air Conditioning in El Cajon, with second place going to Guillermo Mendoza. McElveny said the competition was challenging and threw him a few curves, but he said he used his math skills and thought problems through to find the best solutions possible.

Now in its 10th year, the Associated Builders and Contractors San Diego Apprenticeship Craft Champions Competition tests the skills of the best of the best. The competition emphasizes the important role craft skills training in an apprenticeship program like ABCSD’s plays in construction by evaluating contestants’ technical knowledge of their craft as well as their skill and talent. 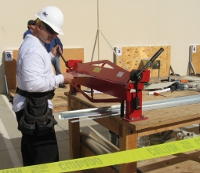 Contestants must first successfully complete hundreds of hours of classroom training and thousands of hours of practical field experience to be eligible to compete. Apprentices and craft trainees who score high marks on the written exam are invited to participate in the skills portion of the competition to determine the San Diego local champions.

The San Diego ABC Apprenticeship Program has a long tradition of national winners having won 11 medals in the last ten years. Sheet metal apprentice Richard Raynor became San Diego’s fourth national gold medalist in 2011, making him the national champion in his craft. Raynor’s successor this year, Jason McElveny, said he hopes to learn from Raynor’s successful experience, so he can bring the championship back to San Diego for a second year running.