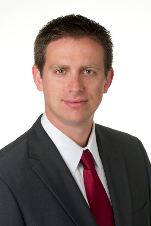 Eric Ganci does not like to be told he can't do something.

The Chicago native first was turned away from music school. But he persisted, was finally admitted and eventually became a band director.

When he decided to change careers three years later, he encountered resistance again, failing a seven-week pre-law school program despite working "like crazy" and doing everything the school's professors had asked.

Undeterred, Ganci still applied for law school. He was accepted at Thomas Jefferson School of Law, graduated in 2½ years, and he passed the California Bar Exam on his first try, when the passage rate was just 33.5 percent.

Now he is co-owner of the law firm Galente Ganci APC with his wife, Renee Galente, specializing in DUI defense.

"Nothing stops him," Galente said. "He really sets goals for himself and doesn't stop until he reaches them. He sets a plan in action on what to do to get there, and he does it.

"His perseverance is what makes him very special."

Once he graduated from TJSL, Ganci faced more obstacles. Like most people looking for a job in 2008, Ganci couldn't find many openings. He took any position he could — paid or volunteer — doing various jobs, from filing paperwork to doing discovery.

A month away from bankruptcy, Ganci decided "it would be easier to find clients than find a job," so he went to work for himself.

"I wanted to pick one area of the law and be better than everybody else," he said. "I learned a ton of science and procedure with DUI defense.

"I got certification to separate myself from the pack. I can now say with pride that I'm qualified to train police officers in field sobriety tests."

He's also the only attorney in San Diego trained by the American Chemical Society on the gas chromatograph, which is a machine used to test blood. He is trained in infrared breath testing and soon will be trained on the breath machine the San Diego Police Department uses.

He credits his career, in part, to "some really wonderful teachers from Thomas Jefferson."

"And also, I wouldn't be anything if it wasn't for my wife, Renee," Ganci added. "It's just completely surreal working with, hands down, the best attorney I've ever met and truly my best friend."

He said he isn't done learning about his practice.

"I continue to commit myself to learn both the good and the bad about DUI science," Ganci said. "I want to learn the true science, so I can teach judges and juries about the true science of the law."

"He is incredibly passionate about what he does," Galente said.