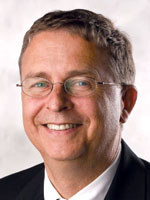 Niels Schaumann has been named the new president and dean of California Western School of Law, officials announced Wednesday.

He will succeed Steven Smith, who is stepping down in August after 16 years at the helm.

Schaumann currently serves as professor of law and vice dean for faculty at William Mitchell College of Law, an independent law school in St. Paul, Minn.

"The thing that really impressed us was his vision for the law school and his ability to understand our mission," said Kenneth Greenman, chairman of California Western's board of trustees. "And, of course, we feel he has the skills and ability to carry out that mission."

Schaumann, who has been a professor at William Mitchell College of Law since 1989 and vice dean for faculty since 2007, will take his new position on Aug. 1.

"I think everybody — the faculty, students, alumni — all are thrilled with Niels and likewise he's repeatedly expressed his pleasure and honor of coming to California Western," Greenman said.

He credited the close ties between William Mitchell and California Western as a key factor in his decision. Both schools are members of the Consortium for Innovative Legal Education, a group of independent law schools that work closely to develop new programs and study abroad opportunities for students.

“I already knew much of the great work being done at California Western to prepare students for practice in today’s legal environment, and have great respect for the work of their faculty and staff,” Schaumann said in a prepared statement. “I look forward to learning more about the school’s exemplary clinics and programs and helping identify new ways to meet the needs of students, alumni and the legal community.”

He then practiced law for more than four years with the New York law firm of Cravath, Swaine & Moore, specializing in corporate matters.

Greenman said Schaumann will be able build on the work done by Smith, who will return to campus in a teaching role after taking a sabbatical.

"We want to continue to develop creative problem solvers and continue to enhance our academic standing," Greenman said. "And bring to the law school professors that are renown in their field and continue to improve the caliber of our students."