Companies protecting everything from sound to smell

By DOUG SHERWIN, The Daily Transcript
Friday, May 4, 2012

The NBC chimes. Aflac's quacking duck. The shape of a Coca-Cola bottle.

All are well known symbols and worthy of trademark protection as much as the brand names they represent.

"If you hear the NBC chimes or the Intel sound on a TV commercial and you're not in the room, you still know what that commercial is about," said San Diego trademark attorney Lisa Martens, a principal with Fish & Richardson. "T-Mobile does all pink. Folks are trying to get recognized for something other than their name."

The lion's roar at the beginning of any MGM movie also is a registered trademark.

Textures, fragrances and shapes all can be registered with the U.S. Patent & Trademark Office. But the key is they have to have used it enough so consumers will associate them with a certain brand.

"Companies will pour a lot of money into brand recognition, and it doesn't simply mean a word or a picture," said San Diego's Andrew Skale, a patent, trademark and copyright attorney for Mintz Levin Cohn Ferris Glovsky and Popeo P.C. "It's hearing or seeing or sensing something, and now you have instant recognition of a company."

Companies can apply for a nontraditional trademark the same way they apply for the more typical marks. Sound, texture and shape marks can be registered on the first day because they're distinctly different, Martens said. 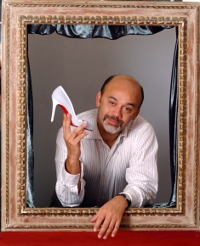 Famed luxury shoe designer Christian Louboutin poses at his shop in London with one of his iconic red-soled high heels in this 2005 file photo. Louboutin is suing fellow French fashion house Yves Saint Laurent in a high-profile case, alleging they designed shoes with a similar red sole, which Louboutin has trademarked. The case has sparked a wide debate in intellectual property law regarding patents on colors. Photo by Eleanor Bentall/Bloomberg News

Colors are more difficult and can't be protected right away. A company has to use it consistently, like in advertising, and prevent any competitors from using it to secure a registration.

Fashion designer Christian Louboutin received a registered trademark for a glossy red outsole on women's shoes, but is having trouble enforcing that mark in a case against Yves Saint Laurent America Inc.

In August, a judge denied Louboutin's request for a preliminary injunction to stop Yves Saint Laurent from using the same color red for one of its shoes. Martens said Louboutin might have erred by choosing to go after one of Yves' entirely red shoes instead of one that just had a red sole.

Several years ago, the motorcycle maker Harley Davidson tried to trademark the sound of its engine, but other manufacturers opposed and, after years of battle, Harley Davidson gave up.

Sometimes sound and color trademarks can be even more powerful than traditional marks, Martens said.

"They become so strong, nontraditional marks like the shape of the Coke bottle or the robin's egg blue of Tiffany's, because of that consumer recognition," she said.

Skale agreed, saying one only needs to see a pair of golden arches to know that it's McDonald's.

The registration process for a sound or a color or a shape is similar to a normal trademark. For a sound, the applicant has to describe it, give a written representation (like musical notes on a staff), and describe the goods and services associated with it. They also have to attach an audio file.

Every trademark is limited to a particular goods or service. When some marks become really famous, they can cover more industries.

Martens said a Fish & Richardson client is trying to trademark a citrus scent for its biofuel. It will require personally bringing a sample to the PTO so they can smell it.

Skale, the Mintz Levin attorney, also said it's a good idea to register the trademark before the product is available commercially. It allows the public vetting process to take place and helps a company avoid mass production of an infringing package or product.

Once it's registered and in use, companies should always watch the market to make sure no competitor is using it.

"It's important to police your mark and protect your mark no matter what it is — a symbol or an image or a sound," Skale said. "You don’t want it to be diluted."