2012 SBDC Advocate of the Year Award 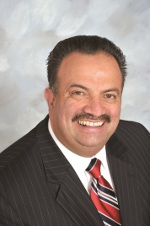 MiraCosta Community College District Superintendent Dr. Francisco Rodriquez is a leader with a steadfast philosophy that economic development and education cannot succeed without the other. This stems from his firm belief that small businesses are vital to the revitalization of our economy. For this, Rodriquez was awarded with the 2012 SBDC Advocate of the Year Award, selected by his peers in the regional network.

Referring to the Small Business Development Center program, Rodriquez reminded the community of its vitality and priority for expansion in the region referring to it as the “intellectual fuel” needed to drive the engine of small business growth.

“Dr. Rodriquez is an inspiration to all of us that work in the program and an advocate of the highest degree in creating tools for small businesses of all types,” Trujillo said. “His tireless efforts in promoting local economic growth in the middle class and his dedication to representing the underserved are to be commended on many levels.”

“His unrelenting support as a prominent leader in the community, Rodriquez promotes the SBDC at every opportunity and is considered a robust program in the North County region,” she said. “Through this support the SBDC continues to receive funding from the California Community College Office of the Chancellor Economic & Workforce Development program. His efforts brought matching funds from the MiraCosta District to support small business activities and a successfully remodeled North San Diego SBDC facility.”

Promoting the added value of the program to the district and regional economy, Rodriquez avoided internal cost of rent and indirect fees to the college, adding greater financial ability for the operation and success of the organization and the small businesses it serves.

Appointed as MiraCosta’s superintendent/president in January 2009, Rodriquez came to the district with more than 27 years of experience in California public higher education and now has 15 years of service in California Community Colleges, beginning this career path in 1997.

Rodriquez serves on the teaching faculty for the graduate education programs at Sacramento State and San Diego State University. Serving on several local and statewide organizations, he earned multiple awards and honors for his contribution to higher education and underserved communities with his leadership and scholastic skills.

A first-generation college graduate and English as a second language learner, Rodriquez earned his Ph.D. from Oregon State University, a master’s degree in community development and his bachelor’s degree in Chicano studies from the University of California, Davis.