With the threat of sequester looming over the federal budget, U.S. Small Business Administrator Karen Mills came to San Diego Wednesday to tout the importance of funding small businesses during an era of cutbacks.

During a visit to Label King, a label-printing plant in Miramar that has relied on an SBA line of credit to expand its operations, Mills said that the sequester -- which is slated to go into effect on Friday -- would be “very bad” for small businesses that contract with the government or depend on SBA lending.

“Small businesses are already losing contracts from the Defense Department as it begins cutting back,” she said. “And the potential impact on SBA activity -- including loans, small business consulting, and helping small businesses gain access to contracts -- is a critical concern. The sequester will cause some of that to be damaged.”

The White House estimates that if sequestration takes effect on Friday and continues over the next year, the SBA would cut back its loan guarantees by $900 million nationwide.

Mills cited Label King as an example of the impact that SBA loans can have. 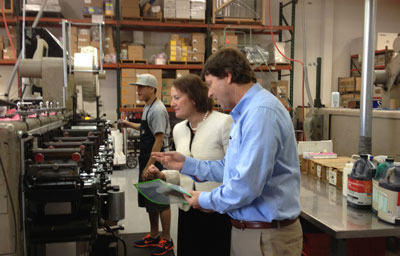 When Robert Parker launched the firm in 2002, he had just one printing machine and one production assistant in a cramped 1,500-square-foot facility in Kearny Mesa. The plant was so small that Parker had to store his supplies outside during the day, so he and his assistant could have enough room to move around.

As the business grew, he wanted to move to a bigger facility, but he was stymied by the expense.

“From riggers for the machines to electricians, plumbers, flooring contractors, industrial engineers for the layout and machine technicians to recalibrate the machines, the costs to move were tremendous,” he said.

In December 2011, Label King gained a $175,000 SBA-guaranteed revolving line of credit through Wells Fargo. The loan gave Parker the money he needed to move the company into its current 8,300-square-foot facility, where it has 15 workers and four high-quality printing machines.

Label King recently hit a milestone of manufacturing more than 1 billion labels for some of the bigger names in San Diego’s telecommunications, sports equipment, food processing and brewery industries, which Parker declines to identify for competitive reasons. Parker said Label King’s revenues have increased 10 percent since receiving the loan and he projects faster growth in the future, now that the company has fully settled into its new digs.

Despite its relatively small work force, Label King’s impact reaches far beyond San Diego. It buys tooling equipment from Missouri, inks from North Carolina and paper and film from Ohio, Indiana and Texas. And the labels that it prints go on products bound for such destinations as Mexico, Japan, Germany, England and South Korea. Most recently, Parker has been working on a deal to provide labeling for products tied to the upcoming World Cup soccer competition in Brazil.

“The loan isn’t just having an impact in San Diego,” Mills said. “It’s driving a supply chain that crosses the entire country.”