Whether it's a birthday card from grandma, your monthly electric bill, documents from your attorney, even the come-ons in junk mail, it all arrives in your mailbox enclosed in an envelope of one kind or another -- an envelope quite possibly among the billion or so manufactured annually by Southland Envelope Company's 130 employees at its 75,000-square-foot plant in Lakeside.

Southland Envelope Co. was founded 45 years ago by Frank Soloman Sr. as the first company of its kind in San Diego. Until then, local businesses had to rely on Los Angeles-based envelope manufacturers.

Southland is still the only envelope manufacturing company in San Diego County. 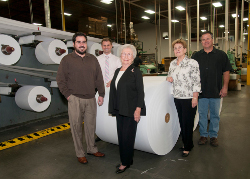 “My parents started the company in [March] 1970. We are now a third-generation family-owned business. So, 45 years of making envelopes in San Diego. That's what we do,” said Dianne Gonzalez, who is the company's CEO and in charge of its day-to-day operations. “My mother [Rita Soloman] is still alive. She is not active like she once was in the company, but she comes in and is certainly a part of it.”

Dianne's son, David Gonzalez, is the company's general manager and her “right-hand person, the one I really rely on.” Two of Dianne's nephews are also employed by Southland, she said.

Large and small envelopes, colored envelopes, envelopes with clasps, string ties and multiple windows, Southland Envelope Company is capable of manufacturing envelops with “hundreds of different configurations” for use by the variety of businesses and people that make up its primary customer base throughout California, Arizona and Nevada, David Gonzalez said.

Southland is still making envelopes, and only envelopes, just the way it has for many years, David Gonzalez said.

The company's machinery -- which he said might not be considered cutting-edge, or perhaps as sophisticated as some of the new equipment coming off the line today -- are in action 24 hours per day for five days (or six, if necessary) each week.

“All of the equipment in the building actually predates our move [to the Lakeside plant in 2000]. Envelope machines, folding equipment, what we use to produce the envelopes,” he said. “I think our oldest piece of machinery is like a 1972 [model]. Our newest one is about a 1999. The industry allows for that.”

“The equipment lasts pretty much forever. [Older equipment] has not hindered us in any way,” Dianne Gonzalez said. “We're increasing business and increasing sales.”

Southland is capable of customizing all types of envelopes for its customers, including printing on the inside and outside of envelopes. The company also has an in-house graphic design department that can transfer customers' design concepts into print-ready art.

“You know, people are trying to maximize the money that they're spending on mailing campaigns or what they're putting in the mail stream, and they're able to do that effectively with how they print and what they print on the envelope,” said David Gonzales. “So, we're seeing things getting a little more creative on that side of things.”

Without question, the advent of the Internet and use of email have affected the envelope manufacturing industry, but not as much as one might think, at least not in the case of Southland Envelope Company.

“Back in the boom of the dot-com days, you know, '99, 2000, 2001, that's when a lot of people thought everybody (would be) going paperless,” David Gonzalez said. “I can say 15 years later there are still many campaigns and pushes to go paperless, but we're doing more business now, we've had more growth in our volume, and we've made more envelopes in the last three years than we made in the history of the company. People are still using envelopes.”

David Gonzalez believes that people will continue to do so.

“It's been proven over and over again that direct mail is the most effective way to communicate. Email, I know, will probably always be there, but I feel that mail will always be there, as well,” he said. “There are people who just still like to receive that piece in the mailbox. It still has value.”