By Padma Nagappan, Special to The Daily Transcript
Wednesday, May 20, 2015

When Albert Abel Frost bought a railcar load of maple wood flooring and sold it to his first customers in San Diego back in 1911, he may not have known he was laying the foundation for a family business that has lasted more than 100 years.

His lumberyard at the corner of Ninth and L streets near what is Petco Park today has shifted location several times over the past century, but his sons, grandsons and great-grandson have steadfastly stuck with the flooring and cabinetry business he began.

Frost Hardwood Lumber Company is now managed by two grandsons -- James Frost, who is president, and GT Frost Jr., who is CEO -- and great-grandson Byram Frost, who is a vice president and James’ nephew. 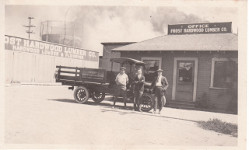 A photo from 1918 shows the founders and office of Frost Hardwood Lumber Company, a business that has remained in the Frost family. Courtesy photo

Many family businesses morph over time, some disappear and others branch out, so how is it that the Frosts have managed to continue in the same line of business for so long?

“A lot of it was just good family planning,” James Frost said. “We are a cohesive family, and we had a commitment to continue what my grandfather started. We are just the stewards.

“We understand a lot of blood, sweat and tears went into this business. It survived the big market crash of 1929, World War II and several recessions,” he said.

He credits dedicated longtime employees who helped the family business get to where it is today. GT came aboard in 1975 and James joined the business in 1980, and Byram stepped in for his father, Bruce, who retired a few years ago.

After World War II, the Frosts saw a trend toward wall-to-wall carpeting, so the business shifted from focusing exclusively on wholesale wood for flooring to wood for custom cabinets. Contractors, and cabinet and furniture makers are their main customers. 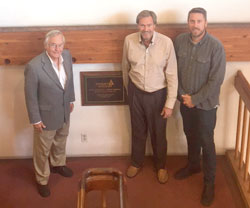 While much of it has become commoditized and is made overseas and shipped here, Frost Hardware has a niche market in the medium- and high-end custom cabinet market, and sells to contractors who outfit custom homes in areas including Poway and upscale neighborhoods such as Rancho Santa Fe.

Aside from that, “We might sell to a door manufacturer in Mexico that makes the doors and ships it for a job here,” James Frost said.

Despite shifts in the market, things were chugging along until 2008, when the Great Recession took its toll, and the business went from 54 employees at its peak to the current 27 on its rolls.

The family consolidated operations to centrally located Miramar Road, on a four-acre property their great-uncle A.H. Frost bought in the early 1900s for about $4 an acre. A three-acre lot across the street acts as a holding yard for the lumber.

What are some of the biggest changes they have witnessed in the 35-plus years they have been in the family business?

In the face of all that, he said, loyal, long-term employees and repeat customers have helped the business stay its course.

“We’ve stood the test of time and we want customers to have a good experience at Frost. We have daily delivery, we can ship the same day, we’re almost like a one-stop shop for anyone needing wood for their project,” he said.

The Frosts rely on one another’s strengths to divide the responsibilities – detail-oriented GT is on the administrative side, James is an operations guy who handles the day-to-day running of the business, and Byram does a little of both.

He said they mostly agree on everything and if they don’t, then they work it out by compromising.

“Our family is known for compromising,” he said. “We know how to make things work.”

Great-grandfather A.A. Frost was a conservative businessman and his descendants have continued that tradition, staying away from risk-taking but planning succession carefully.

While Byram has joined the company from the fourth generation, James Frost’s own children have opted for professional careers, although they did work at the firm while they were in college.

“Maybe I cracked the whip too hard back then,” he said with a laugh.

Whether an employee is a family member or not, everyone has to work up the ranks.

He started by doing manual work, unloading lumber, until he progressed and got a job inside. The company believes in promoting from within, he said, so a truck driver could become a salesman eventually, should they desire such a career path.

The Frosts have perfected the art of staying power and plan to be around for a long while.

“We are proud to be part of the San Diego community and we will continue to strive to be around for another 100 years,” he said.