OH Juice! CEO commits to not compromising on core values

By MARIE TUTKO, The Daily Transcript
Wednesday, May 20, 2015

When Hanna Gregor got a call from a friend in San Diego who was in need of a business partner to launch a new juice company, she was up for the task.

Having a B.S. in nutritional sciences from Penn State, Gregor was qualified for the endeavor, which required a cross-country move on her part. She left her home state of Maine and made her way out West to seize the opportunity to develop a line of juices, launch a company and start a new life in a new city.

Unfortunately, the old adage of “business and friendship don’t mix” rang true in this partnership.

After creating the concept for the juice bar and designing the recipes, Gregor had a fallout with her business partner and left the company.

Uprooted from home, she didn’t know what her next step was going to be. Her parents urged that she return to Maine, and it looked like that was her only option. 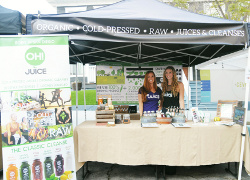 “But San Diego felt right. I wanted to stay,” Gregor said. Not one to give up easily thanks to her competitive nature (she played rugby throughout college), her solution was to launch her own juice company.

With seed money from Solutions Wide, a local tech company and business incubator, she founded OH! Juice in 2013, a line of cold-pressed raw juices and cleanses using produce from area farms.

Gregor crafted a menu of 12 juices with names such as Oh My Greens! and Can’t Compear, and secured stands at the Little Italy and Hillcrest farmers markets, as well as retail space at The Dailey Method -- an international Barre exercise studio -- at its downtown San Diego location.

It’s not easy for juice companies to differentiate themselves in today’s market -- especially in health-conscious Southern California -- where blended, forest-green liquid has found its place at the breakfast table along with coffee. Green juices can be found in the beverage aisle at major grocery stores, new juice bars are constantly opening, and you or someone you know most likely has a fancy juicing machine sitting in the kitchen.

Gregor found a niche by marketing herself as “the New Age milkman,” delivering juices packaged in glass bottles to customers, picking up and reusing the empty ones, and developing a product she says is organic and raw. 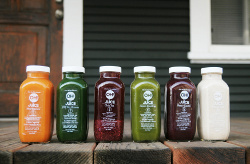 OH! Juice is a line of raw juices made from local produce and delivered in glass bottles. Photo courtesy of Olive PR

Gregor said her goal was to “create a juice that no one can poke holes at” when developing the recipes. Sourcing 95 percent of the company’s produce locally, such as Romaine lettuce, kale and celery from Suzie’s Farm, all of OH! Juice’s juices are produced in North County then immediately bottled and delivered.

“You’re drinking juice made from produce that was picked just the day before,” Gregor said.

Because all OH! Juices are raw, it needs to be consumed in a few days -- they are not treated with high-pressure pasteurization, a technique Gregor said is commonly used to extend the shelf life of juices to about 30 days.

It’s also not possible to use this method for juice packaged in glass, since high pressure is applied to the product after it’s bottled.

Gregor said many mass-produced juices have been dyed green, are not organic, have no fiber and are high in sugar, whereas OH! Juices are not tampered with.

She also hasn’t given in to pressure to use plastic instead of glass packaging.

“People ask me all the time why I won’t convert to using plastic,” Gregor said.

It’s the most common question she hears, whether from customers or possible outside investors.

“In fact, my driver this morning had just mentioned that plastic bottles would be a lot lighter and easier to carry, but I won’t do it,” Gregor said.

This refusal to compromise on her core values -- using organic produce and sustainable materials, composting and shunning high-pressure pasteurization -- is what Gregor says makes OH! Juice different from other juicing companies.

Gregor is expanding the company’s weekly delivery program to meet consumer demand after raising more than $50,000 through a Kickstarter campaign this month. Plans include finishing work on the new production kitchen and acquiring an insulated delivery van. She hopes to increase OH! Juice’s presence in stores in the next few years.