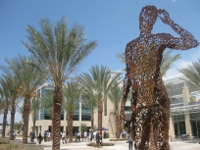 The first phase of the new County Operations Center in Kearny Mesa opened its doors the public earlier this month.

Four major aspects of the county’s seven-year effort to consolidate county-handled business at the County Operations Center in Kearny Mesa were opened for business to the public earlier this month.

With visitors, county employees and the county’s elected officials gathered to celebrate the completion of construction, two new office buildings, a solar panel-topped conference center and an 1,800-space multilevel parking garage went into use for the first time, marking the second rollout in a long-term county project expected to account for a total investment of more than $500 million.

Construction of the latest rollout, termed Phase 1B of the overall campus redevelopment plan, brought the total number of four-story office buildings to four. It also brought the total taxpayer investment into the project so far to roughly $294 million.

The goal: bring as many of the county operations as possible to a centralized hub, with the goal of saving time, money and hassle for both the county and people who do business with it, such as contractors seeking building permits.

In October 2010, the first two office buildings were completed in Phase 1A, which also included the construction of a central plant and certain utility infrastructure. At 150,000 square feet per office building, the structures are now a centralized home to a large portion of county activity that used to be spread throughout the region.

“We’ve often said at the county that we want to have a one-stop shop,” Horn said. “I think this is actually going to be a reality now that we’re all in one location. I appreciate the fact that we made the decision a few years ago that, rather than sell this property, that we would keep it, clear it and rebuild it.

“I think that was the soundest, wisest decision we made,” Horn continued.

The Phase 1A completion brought the county’s human resources, general services, public works, environmental health, parks and agricultural weights and measures departments to the campus, as well as small units of the sheriff’s department.

With Phase 1B now complete, a number of other departments can move on campus, including the county’s planning and purchasing and contracting departments.

The consolidation of planning and developmental services in one location falls right in line with the goals of the county’s Red Tape Reduction Task Force, Horn added, making the process of communication between various planning departments easier with them literally steps from one another.

According to Don Steuer, chief financial officer for the county of San Diego, the consolidated operations will also save the county around $2.5 million annually because it owns the property and will no longer have to make lease payments to various owners of spaces it occupied elsewhere.

Steuer also said that because most of the project costs have been paid in cash, the county is poised to avoid paying roughly $1 billion through the next 30 years in what could have been additional financing costs. He said that of the budgeted costs for all of the new structures at the COC, which also includes the earlier-completed Medical Examiner office to bring the total to $382 million, $269 million was paid in cash, leaving $113 million to finance.

The county also sought to make the operations center more inviting, health-promoting and environmentally friendly. In doing that, an employee fitness center was built into one office building and work from 14 artists was incorporated into different areas of the campus.

Designed by RJC Architects with construction led by Lowe Enterprises, the two new office buildings are expected to receive a minimum of LEED Gold certification from the U.S. Green Building Council, while the conference center — built with a green roof and solar panels incorporated into its mostly-transparent front overhang, is expected to earn LEED Platinum status.

The county expects to break ground on the next phase of the project in late 2012, which will bring a new home for the Registrar of Voters and a multipurpose facility that will include the sheriff’s and probation departments, the county auditor and controller, and treasurer-tax collector services.

May 14, 2014 -- Reporter Carlos Rico highlights some of the improvements along Harbor Drive that are transforming the look and feel of the San Diego waterfront.

San Diego County Board of Supervisors Chairman Greg Cox gives the State of the County address Feb. 13 (part 1 of 3).

San Diego County Board of Supervisors Chairman Greg Cox gives the State of the County address Feb. 13 (part 2 of 3).

San Diego County Board of Supervisors Chairman Greg Cox gives the State of the County address Feb. 13 (part 3 of 3).